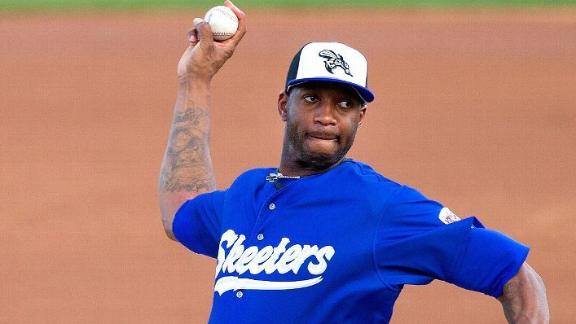 Although he took the loss in his professional debut as a baseball pitcher, former NBA All-Star Tracy McGrady said Saturday it was "gratifying" to get on the mound Saturday night for the Sugar Land Skeeters.

McGrady allowed two hits and two runs in 1 2/3 innings. The 34-year-old right-hander threw 35 pitches with 18 strikes and walked two in the 5-3 loss to the Somerset Patriots.

He allowed a single in the first inning before former major leaguer Edwin Maysonet hit a solo homer off of him with one out in the second.

"All in all I did pretty well, and those guys [his teammates] seem to think I did as well," McGrady told the Houston Chronicle. "I give myself a B-minus.

"I'm sure they're [Somerset] not used to a 6-8 guy being on the mound pitching to them. I was just trying to relax myself, keep my composure. Because this is different territory."

McGrady played baseball until his senior year in high school when he transferred to a school without a baseball program. He was a seven-time NBA All-Star and won two scoring titles.

"If this is the only time I pitch, it's a gratifying feeling," McGrady told the newspaper. "I knew I was on a pitch count, I didn't know what that number was. I knew I wasn't going to go too long."