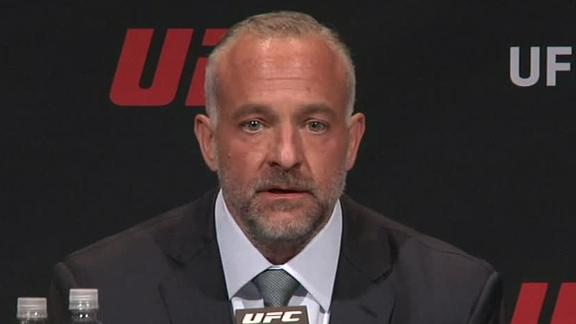 LAS VEGAS -- In a landmark move, the UFC has announced a multimillion-dollar anti-doping plan, which includes year-round drug testing of its entire roster, to be made effective July 1.

UFC CEO Lorenzo Fertitta announced the promotion's intentions during a news conference Wednesday. The news comes less than one month after one of the sport's most successful athletes, Anderson Silva, failed drug tests before and after a non-title bout at UFC 183 on Jan. 31.

The UFC's effort encompasses a random drug-testing program implemented by a third-party agency and the funding of an enhanced program to be administered by athletic commissions prior to all future main events and title fights.

The company also will advocate harsher suspensions and penalties for first-time offenders, including a four-year ban -- the maximum suspension handed down by the World Anti-Doping Agency for a first-time offense.

"I think this is a callout to all the athletes on our roster that you will be tested in-competition and out-of-competition," Fertitta said. "If you are using performance-enhancing drugs, you will be caught and there will be significant penalties."

The current standard for a first-time PED-related offense in mixed martial arts is a nine-month suspension.

"Fighters are going to look at risk versus reward: 'If I can make a few million, I'll take the risk of getting caught,'" White said. "Two to four years is career threatening. If you're 28 years old and you get busted for PEDs and you're off four years -- that might be the end of it."

The UFC expects to announce the specific third party it will partner with later this year. Fertitta said he could not disclose the names of organizations the UFC has been in contact with, citing confidentiality agreements, but acknowledged there are only a few available.

In the past two years, Fertitta stated the UFC has spent approximately $500,000 on anti-doping efforts. In the case of out-of-competition testing, which takes place during a fighter's training camp rather than fight night, money was given directly to athletic commissions to implement the program.

According to company statistics, UFC fighters submitted to enhanced, out-of-competition testing 19 times since 2013. In 26.3 percent of those instances, an athlete tested positive.

"The 26.3 percent failure rate is an alarming rate to us," Fertitta said. "What that means to us is that something needs to be done to increase the amount of out-of-competition testing.

"We understand and are willing to commit several million dollars to both in- and out-of-competition and random PED drug testing."

One potential snag the program faces is the willingness and legal ability of athletic commissions and federal organizations to honor UFC-mandated suspensions that result from its independent program.

Francisco Aguilar, chairman of the Nevada State Athletic Commission, applauded the UFC's announcement Wednesday, but stated his agency would naturally have a concern regarding a licensed fighter's due process, in relation to a company-mandated suspension.

"I think we all have the same goal and the same ambition," Aguilar told ESPN.com. "I think as a state agency, you always have to be concerned over what your citizens, your licensees, are entitled to have, and that is due process. We will need to figure out how to get around due process issues to ensure fighters always have an opportunity to present their case."

UFC chief operating officer Lawrence Epstein acknowledged the regulatory challenges facing the promotion's proposal, saying it would be a process.

"There are relatively unsolved legal issues at this point and effective July 1, if we don't have those issues worked out, we're going to have to take the proverbial leap of faith that athletic commissions will stand behind these decisions," Epstein said. "In the meantime, we will work very hard to put the legal framework in place so that once we hand down a suspension, it is being honored by every commission and every federation in the world."