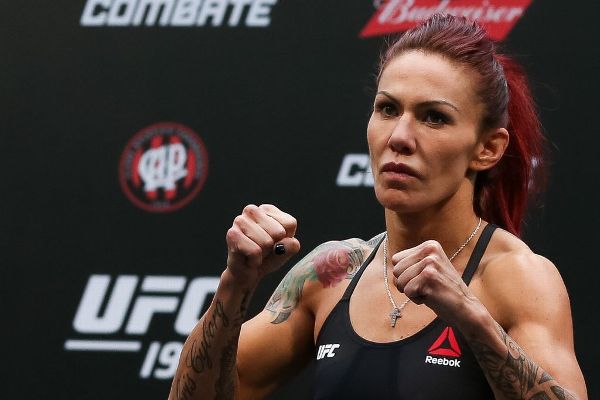 Female mixed martial arts star Cris "Cyborg" Justino's next fight might be for a UFC championship, as the organization is apparently willing to change its previous stance against opening a featherweight division.

Justino (17-1) is a 145-pound champion in all-female promotion Invicta FC. Her last two fights took place in the UFC, at a catchweight of 140 pounds. Currently, the UFC's heaviest female weight class is 135 pounds.

Justino, 31, struggles to make even the 145-pound weight and recently said she'd no longer cut any lower than that. According to White, the UFC actually offered Justino two inaugural featherweight title fights, against Holly Holm and Germaine de Randamie, but the Brazilian turned them down.

"I offered Cris Cyborg a title fight at 145 pounds about a month ago," White said. "She had eight weeks to get ready for it. She said she couldn't make the weight.

White went on to say he didn't understand why Justino turned down the second offer, given the ample amount of time between now and UFC 208.

Justino was interviewed multiple times last month by Outside The Lines for a story focusing on weight cutting in MMA. In a Nov. 16 interview, she said she'd only received an offer to fight at 140 from the UFC. But in a follow-up interview the next week, Justino said she had gotten two 145 offers from the UFC on Nov. 21.

Justino said UFC first offered a non-title fight at 145 pounds, which she turned down. When the UFC followed up with an offer of a title bout, she also declined.

Justino's manager George Prajin addressed the situation Tuesday in a statement to ESPN.com.

"We are blessed and thankful to the UFC, Dana White and [matchmaker] Sean Shelby for finally offering to open the women's 145 division," the statement read.

"Unfortunately, Cris felt that she was not physically or mentally ready to take the fights for the proposed dates, especially after her last weight cut. We understand the [UFC's] frustration, but no one is more frustrated than Cris.

"I can say that she is back in the gym and doing everything possible to get mentally and physically ready to seize this amazing opportunity! Cris hopes to get back in the Octagon sometime after March 1, 2017."

As far as Justino's opponent, White said Holm, a former FC bantamweight champion, wanted the fight but was advised against it by her coach, Mike Winkeljohn.

According to Holm's camp, she accepted a bout against Justino at 138 pounds before negotiations stalled.

Justino is a former Strikeforce champion and the No. 1-ranked female pound-for-pound fighter in the world. A potential megafight between Justino and Ronda Rousey dominated headlines for years, although Rousey and the UFC always insisted the fight take place at 135 pounds.

With Rousey's fighting future less certain than before, she is scheduled to fight defending bantamweight champion Amanda Nunes at UFC 207 on Dec. 30.