U.S. fights back to beat Sweden 4-3 at ice hockey worlds 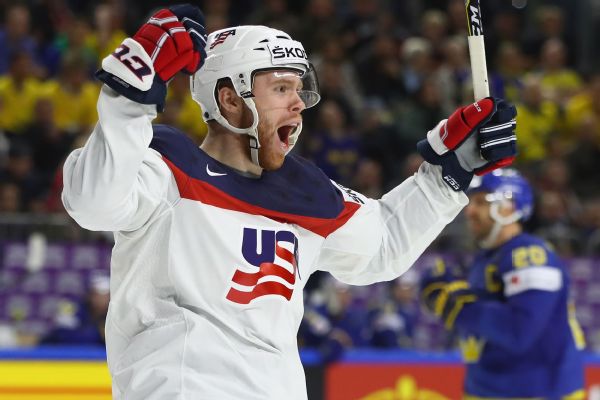 Vadim Shipachyov and Nikita Kucherov scored twice each as record-title winner Russia defeated Germany 6-3 in Cologne, while Nathan MacKinnon notched two more goals and an assist as Canada shut out Belarus 6-0 in Paris, where goaltender Calvin Pickard was outstanding.

With three victories from three games in Group B so far, Canada extended its worlds winning run to 10 games.

Germany captain Christian Ehrhoff was back from injury but Russia, which claimed 22 of its 27 world titles as the Soviet Union, got off to a great start through center Shipachyov after just a minute.

Then the Germans' hopes took a hit when leading scorer Patrick Hager got a five-minute major and game misconduct for a slew foot on Sergei Mozyakin. Mozyakin didn't return.

Shipachyov and Sergei Plotnikov scored to leave the hosts 3-0 down at the interval.

Germany's Yasin Ehliz was penalized for roughing as tempers became frayed in the second period, and again the Russians took advantage for 5-0.

Brayden Point scored early for Canada, which had 11 shots compared to Belarus' four in the first period. MacKinnon scored twice in the second, the first on a power play, taking the center's tournament tally to five.

Also in Group B, the Czech Republic came back from a three-goal deficit to beat Finland 4-3 in a shootout.

Finland raced into a 3-0 lead and goaltender Joonas Korpisalo frustrated the Czechs until he was finally beaten by Roman Horak on a power play in the third quarter.

Quick-fire goals from Radko Gudas and Jan Kovar tied the game with 1:51 to play.

Robin Hanzl scored in the shootout and Petr Mrazek made two saves as the 2010 champions moved to third in Group B.

The United States came back three times to beat Sweden 4-3.

Gaudreau equalized on a breakaway but Victor Hedman gave Sweden a 3-2 first-period lead.

Lindholm came close to a hat trick then Compher put the U.S. in front for the first time, redirecting Connor Murphy's shot with 8:13 left to play.

Sweden's hopes of tying the game were hit when they were left with three against five.

The Americans, who next play next Italy on Wednesday, moved two points behind Russia in Group A.