USA to play in Group D at World Cup 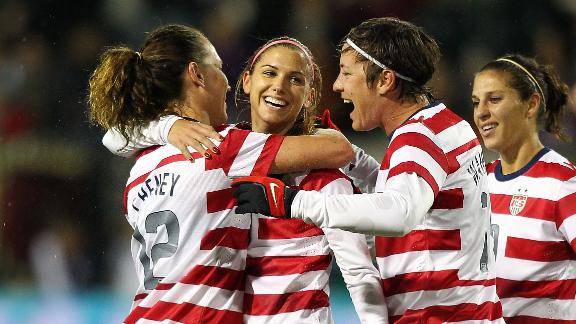 The United States drew seemingly the most difficult group for the 2015 Women's World Cup, with an opener against familiar foe Australia, a match with Sweden and former American coach Pia Sundhage and a first-round finale against perennial African champion Nigeria.

Seeking its third title but first since 1999, the top-ranked U.S. will start Group D against 10th-ranked Australia on June 8 in Winnipeg, Manitoba. The match against No. 5 Sweden and Sundhage on June 12 brings the most intrigue, along with FIFA's insistence on playing on artificial turf instead of grass.

U.S. forward Sydney Leroux was quick to weigh in on the team's tough draw on Twitter.

- Sydney Leroux (@sydneyleroux) December 6, 2014Sundhage coached the U.S. at the 2011 World Cup in Germany, where the Americans lost the final to Japan 3-1 on penalty kicks after a 2-2 draw. She was hired as coach of her native Sweden after the 2012 London Olympics, where she led the Americans to their third straight gold medal, including two under her watch.

"As far as playing Pia -- we had a little giggle about it this morning that we would be in the same group and it turned out to be prophetic,'' Ellis, a former assistant to Sundhage, said during a conference call. "For me, it's actually easier playing a friend. I have tremendous respect for her. I just know it's going to be a great game, and we're both going to prepare our teams the best we can and let them duel it out.''

The U.S. women are making their seventh World Cup appearance. The team won the inaugural tournament in 1991, added its second title in 1999 but has struggled since with a pair of third-place finishes and runner-up.

Featuring an expanded field of 24 teams, next year's World Cup will be played in six Canadian cities from June 6 through July 5. The field includes eight teams making their World Cup debuts. Under the new format, the top two nations in each of six groups advance to the round of 16 along with the top four third-place teams.

After the matches against the Matildas and Sweden in Winnipeg, the United States travels to Vancouver, British Columbia, to face Nigeria on June 16. No other group includes two teams ranked among the top five in the world.

"I think it's going to be a physically challenging group, and I certainly think our depth is going to come into play for us again,'' Ellis said. "We've played Sweden and Australia many times, and I know we've played Nigeria in the World Cup, but they're all presenting slightly different challenges.''

If the Americans win their group, they would play a third-place team from Group B, E or F on June 22 in Edmonton, then be in position to go to Ottawa for a quarterfinal four days later and a semifinal in Montreal on June 30.

The World Cup will be played on artificial turf, which FIFA has never condoned at the men's World Cup. A group of players, including U.S. forward Abby Wambach and German goalkeeper Nadine Angerer, brought a discrimination claim against FIFA and the Canadian Soccer Association before the Human Rights Tribunal of Ontario. There is no timetable for a decision.

At a news conference before the draw, FIFA Secretary General Jerome Valcke was adamant that the event would go on as planned, dismissing claims that playing on an artificial surface amounts to gender discrimination.

Valcke said FIFA is advancing the Women's World Cup with increased prize money -- to $15 million -- and the use of goal-line technology, which was used in the men's World Cup this year in Brazil.

Players say artificial turf can cause injuries and changes the way the game is played because it can affect ball movement. But they also claim that playing on fake grass amounts to discrimination because FIFA has always insisted on grass for the men's tournament.

At the 1994 World Cup, grass was installed for the men at Giants Stadium in New Jersey and the Pontiac Silverdome in Michigan, where artificial turf was used by the local NFL teams. FIFA and the CSA say the artificial turf is FIFA-approved for top international competitions.

Host Canada has stipulated all along it planned to play the tournament matches on turf. Canada, along with the United States, Germany, defending champion Japan, Brazil and France, were seeded and all placed in separate groups so as not to meet in the initial stage.

The eighth-ranked Canadians topped Group A and will face No. 14 China in their opening match on June 6 in Edmonton, Alberta. The group includes No. 19 New Zealand and No. 15 Netherlands, playing in its first World Cup.

Second-ranked Germany, which won the title in 2003 and 2007, is in Group B and opens against Ivory Coast on June 7 in Ottawa, Ontario. Ninth-ranked Norway and Thailand round out the group. Japan leads Group C, which will open against Switzerland in Vancouver on June 6. Cameroon and Ecuador, both making Women's World Cup debuts, also are in the group.

The final group was led by No. 4 France, playing in its third World Cup, along with No. 7 England, Colombia and Mexico, with an intriguing opener between England and France in Moncton, New Brunswick, on June 9. The draw was held Saturday at the Canadian Museum of History in Gatineau, Quebec.

The U.S. team was in Brazil on Saturday to prepare for the International Tournament of Brasilia, a four-team competition at the National Stadium Mane Garrincha. The Americans face China on Dec. 10, Brazil four days later and Argentina on Dec. 17. The championship and third-place game is Dec. 21.

The groups break down as follows: