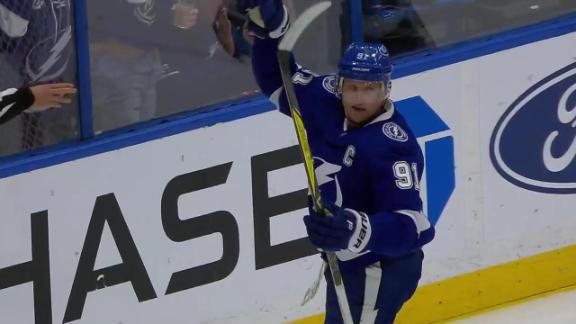 TAMPA, Fla. -- - Andrei Vasilevskiy made 17 saves in his 200th victory and the Tampa Bay Lightning beat the Seattle Kraken 3-0 Friday night for their sixth win in seven games.

Steven Stamkos, Pierre-Edouard Bellemare and Ross Colton scored for Tampa Bay, which improved to 8-1-3 in November and has won three in a row.

"Big achievement. I'm proud of it," Vasilevskiy said. "Obviously, I want to thank my teammates for that because I can't win on my own. It's great teamwork."

Philipp Grubauer made 23 saves for Seattle, which is 1-7-1 on the road in its first NHL season and 0-6-1 in its past seven games away from Climate Pledge Arena.

"We were a half step behind tonight," Seattle coach Dave Hakstol said. "We didn't create enough pressure in the offensive zone. We needed to be better winning pucks in both zones. They defended well. They skated well. They pushed us to the outside."

Bellemare, who was a teammate of Grubauer last season with the Colorado Avalanche, put Tampa Bay ahead at 2:52 of the first period. He took a wrist shot from the left faceoff dot that went past Grubauer's glove for his first goal of the season.

"We seem to be giving up the first goal a lot," forward Jaden Schwartz said. "We need better starts. We wind up chasing (the game) too much."

Colton made it 2-0 by picking up the carom of a blocked shot and beating Grubauer 31 seconds into the second period for his second of the season.


"That's how we're winning," Lightning coach Jon Cooper said of the balanced attack that has compensated for injuries to top forwards Nikita Kucherov and Brayden Point.

"So we're playing D, trying to keep things to the outside, and if things break down, the goalie's there and everybody's chipping in. And especially with some of the guys we have out, it's much needed. It's been a really solid team effort."

Stamkos gave Tampa Bay a 3-0 lead at 11:32 of the third period when he one-timed a pass from Ondrej Palat past Grubauer from the left circle. It was his team-leading 11th goal.

Seattle's Yanni Gourde, who centered the Lightning's third line in their Stanley Cup championship runs in 2020 and 2021 before being selected by Seattle in the expansion draft, received a warm welcome from the sellout crowd at Amalie Arena and a video tribute during a stoppage in play midway through the first period.

He received his Stanley Cup ring from his old team after the morning skate.

"I hope they didn't have the camera on me because my eyes were a little watery," Cooper said of the video tribute. "It showed what a fan favorite he was. He deserved it."

Seattle was without its captain, defenseman Mark Giordano, who was placed in the NHL's COVID-19 protocol earlier in the day. He was replaced by Haydn Fleury.

Kraken: Play the second of a four-game road trip at Florida on Saturday.

Lightning: Begin a two-game trip at Minnesota on Sunday.