Venus Williams into third round 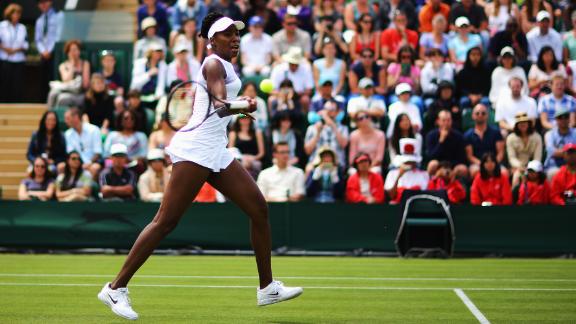 LONDON -- Five-time champion Venus Williams overcame a slow start to beat Japan's Kurumi Nara 7-6 (4), 6-1 on Wednesday to reach the third round of a major for only the second time in her last 10 Grand Slam tournaments.

The 30th-seeded American won six straight points in the tiebreaker and ran off six straight games in the second set to beat 41st-ranked Nara on Court 3 at the All England Club.

"In the tiebreaker that's when it comes down to who's going to be more consistent and more aggressive," Williams said. "In the beginning she was, but thankfully I was able to turn it around."

Williams' next opponent could be 2011 champion Petra Kvitova, the sixth-seeded Czech left-hander who was playing Mona Barthel later Wednesday.

"I think we both play similar games, really go for it," Williams said. "She's one of the kind of players who can get kind of hot against me."

The American served seven aces and had 43 winners. Nara had only five unforced errors, but just 16 winners.

Nara took a medical timeout at the end of the first set and received treatment from the trainer on her upper left leg during the second set.

Williams was several minutes late in arriving on court, and also left the court after the warm-up. She looked sluggish at the start, falling behind 3-0. She then won five straight games, but was broken serving for the set at 5-4.

Nara raced to a 4-1 lead in the tiebreaker, but Williams won the rest of the points. Williams was broken in the opening game of the second set, then won the next six.

The second-seeded Li had two early service breaks and was also broken once on her service early in the second set, but took control at 4-2 and then broke the Austrian player a third time in the set.

Serving for the match, Li clinched the win with consecutive forehands to the open court and then a cross-court backhand volley.

Meusburger had only four winners in the match, compared to 33 for Li.

Fourth-seeded Agnieszka Radwanska of Poland opened play on Centre Court and needed less than an hour to down Australia's Casey Dellacqua 6-4, 6-0.

Venus Into Third Round
Pam Shriver talks to Venus Williams about how she was able to stay aggressive in the first-set tiebreak in her straight-sets win over Kurumi Nara.