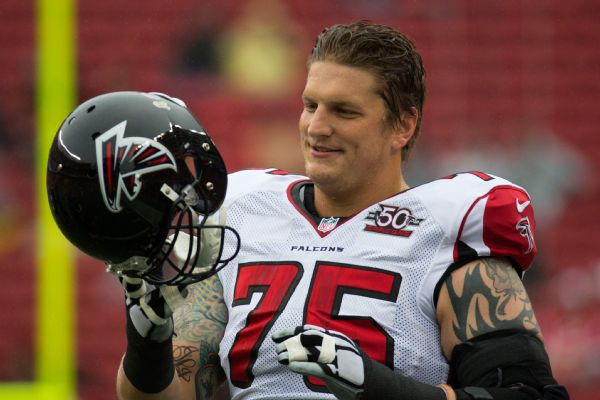 ESPN
By Ben Goessling
EDEN PRAIRIE, Minn. -- Recovered from his knee surgeries and taking snaps at left tackle during individual drills with the league's only undefeated team on Tuesday,Jake Longhas a new lease on his football career.

Long practiced with the Minnesota Vikings for the first time Tuesday, after working out for the team on Monday and signing with the Vikings on Tuesday morning. He was the No. 1 pick in the 2008 NFL draft by the Miami Dolphins when current Vikings offensive line coach Tony Sparano was the Dolphins' head coach.

"They have a great team, and I'm really excited to be a part of it," Long said. "When I got that call, I was jacked up and ready to roll. We had the workout yesterday, everything went well, and then [I] signed. Getting back out here today, getting back to football, I was like a kid in a candy store."

Long said the Vikings first reached out to his agent last week.

"He hasn't had a training camp, so he's relatively healthy when he came in for the physical," general manager Rick Spielman said. "He passed our physical or we wouldn't have signed him. And we know that he was a pretty good football player when he was healthy. So, we felt it was the best option for us out there."

The Vikings placed right tackle Andre Smith on injured reserve Tuesday.T.J. Clemmings' struggles at left tackle, though, could put Long in the running to protectSam Bradford'sblind side for a second time, after the two played together in St.Louis with the Rams.

Smith, who signed a one-year deal with the Vikings this past spring, injured his triceps on Oct. 3 against the New York Giants and was replaced by Jeremiah Sirles. Smith is the second tackle the Vikings have placed on injured reserve this season, following Matt Kalil, and the fourth offensive starter lost to injured reserve (including running back Adrian Peterson and quarterback Teddy Bridgewater).

Long, a four-time Pro Bowl lineman, underwent ACL surgeries in his right knee in both 2013 and 2014 while with St. Louis. The 31-year-old played just 11 snaps for the Atlanta Falcons in 2015.

Long told ESPN in June he was "finally healthy ... the best I've felt in five or six years." His pronouncement was endorsed to teams by Dr. James Andrews, who has performed Long's surgeries and overseen the player's recovery.

TheBaltimore Ravenswere on the verge of signing him in July, but the deal fell apart when Long declined to sign a waiver on his right knee.On Tuesday, Long said the wait for a job was frustrating, because "I knew I was healthy," but he sounded confident that he's ready to contribute.

"Injuries happen, and unfortunately, I've had my fair share," he said. "Through all of them, I've put my head down, I've rehabbed, worked hard and haven't given up. I know what I can do. I know the type of player I can be when I'm healthy. So I just put my head down and got through the frustration to get back. And now I got this opportunity, and I have to thrive in it."

Sources say Long is willing to play for around the veteran minimum wage of $885,000, which would be prorated with 11 games remaining in the regular season. The Vikings have only an estimated $1.8 million of salary-cap space available.

While Long joins the team, it appears the Vikings will also continue to be without guard/tackleMike Harris, who started all 16 games at right guard last year but was placed on the non-football illness list this past summer. After initially saying the issue was related to his head, Harris has said little about his condition other than that he looked forward to returning when doctors cleared him, but Zimmer said on Monday it didn't look like the Vikings would get Harris back in 2016.

After left guard Alex Boone missed time with a hip injury and right guard Brandon Fusco left with a concussion on Sunday, center Joe Berger is the only Vikings starting lineman not to miss time this season.