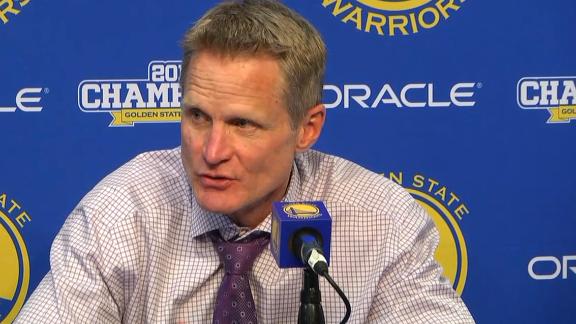 OAKLAND, Calif. -- With the Golden State Warriors having wrapped up the No. 1 seed in the Western Conference, coach Steve Kerr said he is leaning toward resting his players but that the team will meet to discuss the issue.

"We are going to talk about it tomorrow," Kerr said Thursday night after the Warriors' 112-101 winover the San Antonio Spurs, their 70th victory of the season. "We've been putting it off for as long as we were able to, which was until we got the 1-seed. Now that we have that, I'm inclined to give some guys some rest if they need it, but I've sort of made a pact with the guys that if they are not banged up and they are not tired and if they want to go for this record or whatever then -- so we got to talk."

The Warriors have three games remaining and must win them all to surpass the 1995-96 Chicago Bulls, who set the NBA record for wins in a season with 72. Clinching the No. 1 seed was Kerr's primary goal.

Asked about his concerns, Kerr said, "I'm a little uneasy about it. It's not that I'm worried about injury. You can get injured in practice. It's not so much that I want to rest guys to avoid injury, but we do have a back-to-back here. It will be our third game in four nights."

The Warriors are off Friday but play Saturday at Memphis and Sunday at San Antonio before closing the season against the Grizzlies on Wednesday at home.

All-Star forward Draymond Green said he thinks most of his teammates are aiming for the wins record over rest.

"Think about the year we've had: started 24-0, haven't lost two in a row all year, have had several streaks of seven-plus wins in a row, yet we're still sitting here needing three in a row," Green said. "That tells you how hard this is to do.

"So to get this far and kind of just tank it and say, 'Aw, never mind.' ... Let's face it, we probably will never get to this point again. That's why it's only been done one time. I think most guys in the locker room are all-in, and we'll figure that out this weekend."

"I just told guys, 'Hey, if you need the rest, take the rest, and if you don't, we going after it,'" he said. "I think it can be tough depending on how you want to look at it, and most guys in the locker room are saying we're right here, we put all this effort into it, let's try to go for it."

All-Star guard Klay Thompson was direct about what his decision will be, telling ESPN, "I'm not going to rest."

Forward Harrison Barnes echoed that sentiment, saying, "I'm 23, so I've got no problem playing the rest of these games, and we'll go from there."

"We wanted to take care of tonight and clinch home court for the playoffs, was a goal of ours," Curry said. "With three games left and 73 still there, it's obviously a lot to play for."