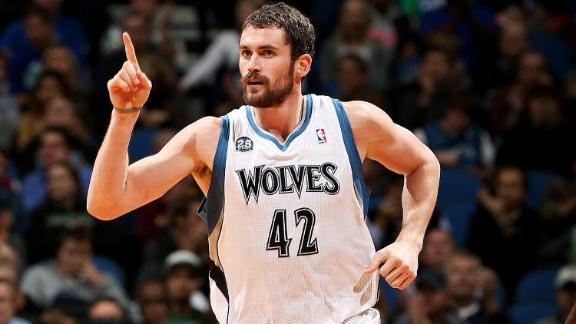 The Golden State Warriors have hit an impasse in their trade pursuit of All-Star forward Kevin Love due to what is being described as an "organizational split" on the willingness to part with prized shooting guard Klay Thompson, according to sources close to the process.

After it appeared that the Warriors were prepared to part with Thompson in a deal to land Minnesota's Love, sources told ESPN.com that Hall of Fame consultant Jerry West and new Warriors coach Steve Kerr have voiced opposition to surrendering both Thompson and a future first-round pick to the Timberwolves along with former All-Star forward David Lee for Love and Wolves guard Kevin Martin.

Others in the Warriors' organization are said to be willing to surrender Thompson if it means landing Love, who is widely regarded as the marquee name on this offseason's trade market. But sources say the talks, which were gathering momentum in advance of the upcoming NBA draft, have stalled.

In a visit Friday with local reporters, Warriors general manager Bob Myers downplayed his team's chances of winning the Love sweepstakes, describing the prospect of a significant trade before July 1 "unlikely." But Myers added that he would have been similarly pessimistic last July had he been asked about Golden State's eventual acquisition of Andre Iguodala.

The Los Angeles Times reported in Saturday's editions that the Los Angeles Lakers have tried to join the discussions by offering to include the No. 7 pick in Thursday's draft to the Wolves in a bid to route Thompson to L.A. in a three-way deal. Thompson, 24, is not only half of what former Warriors coach Mark Jackson routinely referred to as the best-shooting backcourt in NBA history, alongside star Stephen Curry, but also is regarded as a top-notch perimeter defender.

ESPN.com reported Thursday that Minnesota also is interested in Golden State's Harrison Barnes as a potential addition to the transaction, which could give the Warriors further pause.

Sources told ESPN.com that the Lakers' attempts to join the Minnesota/Golden State talks are part of a larger plan to explore their options with the No. 7 pick, which is L.A.'s highest draft selection since drafting James Worthy at No. 1 overall in 1982.

The Lakers are said to be more likely to hang onto their pick rather than part with it, especially given the possibility that highly touted big man Joel Embiid falls to No. 7 in the wake of a foot injury that required surgery. But L.A. has indeed been shopping the pick -- both on its own as well as packaged with the expiring $9.7 million contract of two-time MVP Steve Nash -- to see what's out there trade-wise.

ESPN The Magazine's Chris Broussard reported Thursday that the Nuggets are offering Kenneth Faried, Wilson Chandler and the No. 11 pick in Thursday's draft for Love, while Boston reportedly is building its pitch around the No. 6 and No. 17 overall picks in this draft and the inclusion of a veteran such as Jeff Green or a younger player such as Kelly Olynyk or Jared Sullinger.

Any team that trades for Love, though, will need assurances that the 25-year-old is prepared to stay there for the long term. Love's intent to become an unrestricted free agent in July 2015 is the reason Minnesota has been forced to consider trading him and makes it highly unlikely any potential suitor would offer anything of value to the Wolves without assurances Love wants to sign a new contract with them.

Love To Warriors Trade Talks Stall
Brian Windhorst discusses the news that the Warriors have hit an impasse in their trade pursuit of Kevin Love.