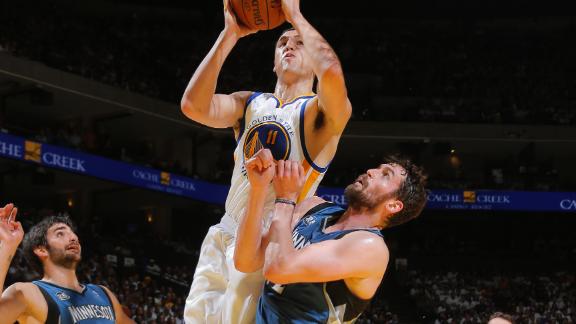 The Minnesota Timberwolves are seeking a future first-round pick from the Golden State Warriors in addition to the rights to prized marksman Klay Thompson in Kevin Love trade talks, according to sources close to the situation.

Sources told ESPN.com that the Warriors, while they covet Love greatly, have been weighing internally whether they're prepared to give up two such assets in addition to former All-Star forward David Lee for Love and Wolves swingman Kevin Martin.

Sources say the Wolves also have expressed interest in Warriors forward Harrison Barnes, with various trade constructions being exchanged by the teams in recent days as next Thursday's draft draws near.

The Boston Celtics and Denver Nuggets also remain at the forefront of the Love pursuit, sources said, but Golden State appears to possess the most appealing combination of players who can make an immediate impact for the Wolves, whose team president -- Flip Saunders -- is also their new coach.

ESPN.com reported earlier Thursday that the Warriors have greatly increased their chances of winning the Love sweepstakes by making Thompson available to the Wolves in trade talks. The Warriors, after initially resisting Minnesota's push for Thompson, have relented and now are including Thompson in various trade proposals.

Thompson's father, Mychal, a former No. 1 overall pick in the NBA draft and now a radio analyst on Los Angeles Lakers broadcasts, said Thursday on ESPN LA 710 AM that the Warriors and Wolves have been discussing a deal in which Golden State would receive Martin from Minnesota in addition to Love for Thompson, Lee and a future first-round pick. The Warriors do not have a first-round pick in next week's draft.

ESPN The Magazine's Chris Broussard reported Thursday that the Nuggets are offering Kenneth Faried, Wilson Chandler and the No. 11 pick for Love and Martin, but it remains unclear whether Love would be willing to sign a long-term deal with the Nuggets.

Boston, meanwhile, is a destination that holds some appeal to Love, but the strength of the Celtics' offer is their reported willingness to surrender two first-rounders in Thursday's draft (Nos. 6 and 17) in addition to a veteran such as Jeff Green or a younger player such as Kelly Olynyk or Jared Sullinger. Many rival teams believe Saunders wants players in return for Love who can produce right away.

ESPN.com reported last month that Golden State and Chicago were two destinations that greatly interested Love, who will have some say in where he winds up because he has the right to become a free agent in July 2015. But sources say the Bulls appear to be more focused on trying to find a way to acquire New York Knicks star Carmelo Anthony rather than pursuing Love. Anthony has until Monday to decide whether to opt in or out of the final season on his current Knicks contract, valued at $23.3 million.

The Wolves have been forced to explore potential trades since it became widely known last month that Love's representatives told Wolves management that the 25-year-old plans to exercise his right to become a free agent in July 2015 and refuse any attempts by the Wolves to re-sign him.

The Wolves are resigned to dealing Love between now and next season's February trade deadline, but many rival executives believe Minnesota is grudgingly prepared to move Kevin Garnett's successor as the face of the franchise sooner rather than later to try to get as much for Love as possible.

ESPN The Magazine's Chris Broussard contributed to this report.