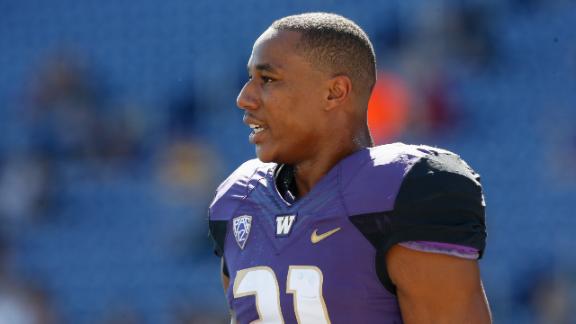 SEATTLE -- Washington cornerback Marcus Peters, a potential first-round draft pick, has been dismissed from the team after another argument with assistant coaches in practice Wednesday, coach Chris Petersen announced Thursday.

"These are not decisions that are taken lightly," Petersen said. "We have high standards for players in our program and they are held accountable when those standards are not met. I wish Marcus the best in the completion of his education and in achieving his football goals."

The school will still provide Peters' scholarship through the completion of his education.

Petersen later spoke after the Huskies' morning practice, saying, "I don't think anybody on either side was happy with the whole situation."

Peters has clashed several times this season with Washington's new coaching staff. The third-year starter was suspended one game earlier this year after committing what Petersen called a "stupid" personal foul followed by a sideline tantrum in a game against Eastern Washington.

According to the report, Peters also argued with coaches in Saturday's win over Colorado and did not practice Tuesday.

The 6-foot, 190-pound defensive back from Oakland has posted 30 tackles, four for losses, and led the Huskies with three interceptions. ESPN's Mel Kiper has Peters as the No. 22 prospect on his most recent Big Board.

With Peters gone, Washington will start freshmen Sidney Jones and Naijiel Hale at cornerback against the Bruins with freshman Budda Baker and sophomore Kevin King at safeties. Washington has been experimenting with wide receiver John Ross at cornerback.

"It's never one thing. We're not going to dismiss a guy because it's one thing," Petersen said. "That's not what we're in this business [to be] about. But when you feel like it just can't work, you've got to do what you've got to do."

Peters is the eighth player to be suspended or dismissed since Petersen took over the Huskies program last December. The most noteworthy was the suspension of quarterback Cyler Miles during spring practice for his involvement in a Super Bowl night altercation last February. Miles was reinstated following spring practice but was suspended for the season opener at Hawaii.

Peters was a stabilizing part of the Huskies' inexperienced defensive backfield. He was a second-team all-Pac-12 selection last season as a sophomore.

It almost seems a certainty now that Peters will enter the draft, but will now be tasked with proving he can avoid being a problem. Petersen said he would give Peters a positive recommendation.

"Marcus [has] got a lot of skill. I really do hope that he has a really good NFL career, there's no doubt about that. And I think he can and we wish him a lot of luck going in that direction," Petersen said.

ESPN.com's Kevin Gemmell and The Associated Press contributed to this report.