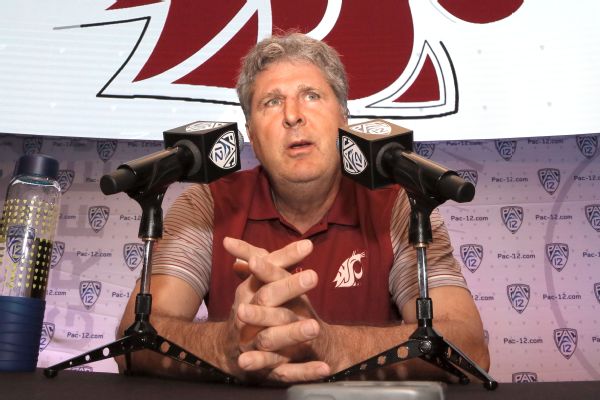 Washington State coach Mike Leach has been fined $10,000 and reprimanded by the Pac-12 for comments he made about Arizona State on Monday.

"I think they still steal signs, and we'll have to keep an eye on that," Leach said. "That is a very unsavory practice they have, so we'll have to do what we can to defend against it."

Leach made similar comments last year about the Sun Devils' attempts to steal signs -- a practice that is not prohibited -- and said the conference should launch an investigation.

Leach said he had heard rumors about microphones and cameras.

"They have a whole command center," he said.

Scott noted in his statement there are no playing rules that restrict a team from observing an opponent's offensive or defensive signals.

"The NCAA playing rules (1-4-11-a, b and f) cover what audio and video equipment is prohibited in the team area, coaching box and coaches' booth, and specifically state that any attempt to record, either through audio or video means, any signals given by an opposing player, coach or other team personal is prohibited," Scott said.