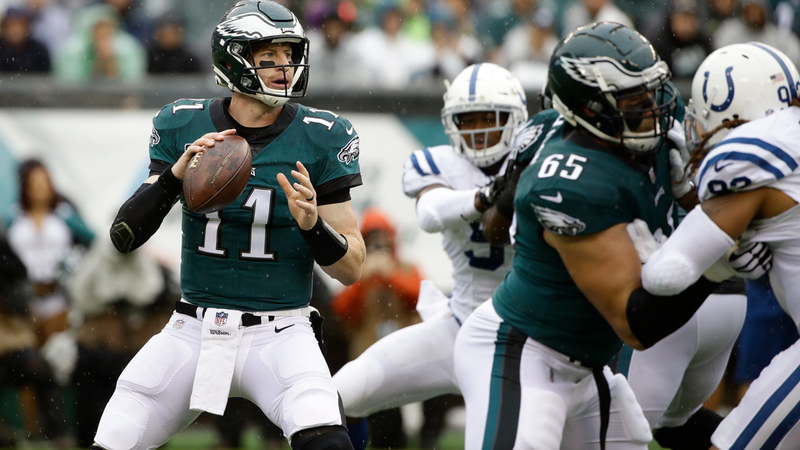 Wentz threw a touchdown pass on his first drive in nine months, Wendell Smallwood ran in from the 4 for the go-ahead score and the Philadelphia Eagles held on for a 20-16 victory over the Indianapolis Colts on Sunday.

“It felt good. It felt good to finally be out there. It’s kind of a long time coming. Obviously a lot of excitement, a lot of emotions. But coming out the way we did with that hot start going right down the field, going some no-huddle tempo, it felt good.”@6abc pic.twitter.com/8Z5P4UUl25

"It was a long time coming," Wentz said after playing his first game since he tore two ligaments in his left knee last Dec. 10. "It felt great."

Adam Vinatieri tied Morten Andersen's career record of 565 field goals by connecting on all three tries, but the Colts (1-2) couldn't take advantage of two turnovers by Wentz inside the 20 in the second half.

"I like to step out there and kick field goals," Vinatieri said, "but it's better kicking extra points, that's for sure."

Indy had a first down at the Eagles 11 and two cracks from the 4, but Luck's pass to T.Y. Hilton sailed over his shoulder in the left corner of the end zone on third down and Derek Barnett sacked Luck on fourth down.

The Colts got the ball again at their 11 with 39 seconds remaining but couldn't reach midfield. Jacoby Brissett threw a desperation pass on the final play that fell incomplete.

"We knew we fell short in the red zone," Luck said. "Our guys gave us a chance at the end. What else can you ask on the road against the defending Super Bowl champs."

"It was exciting to get him back out there... just kind of getting back to his old self... I know he would probably want to get the fumble back, he'd want the pick back, and things like that, and those are things that can't happen"@6abc #Eagles pic.twitter.com/sImcHLquCB

Wentz engineered the winning drive with precise passes and nifty moves. Wentz eluded a sack and threw a 10-yard pass to Nelson Agholor, who hurdled for a first down on third-and-9 to extend the drive at the Colts 26.

"That was huge," Wentz said.

Fans welcomed back Wentz with a standing ovation when he ran through the tunnel during introductions.

I sure missed it! Amazing to be back out there with my brothers! Fans were unreal, the team was resilient, and we got it done. On to the next 🙌🏻 #flyeaglesfly pic.twitter.com/c2IJT2HoaY

On a wet, soggy field, Wentz showed no effects of the injury at the start. He misfired on his first pass, then connected over the middle to Zach Ertz and kept going. Running a no-huddle offense, Wentz drove the Eagles 79 yards in 12 plays and capped it with a 13-yard TD pass to Dallas Goedert for a 7-0 lead.

Wentz was sacked five times, scrambled three times and dove for a first down on one of his runs.

"It felt like riding a bike, get hit and pop back up again," he said.

But the offense couldn't get much going until the fourth quarter. Wentz nearly gave the Colts the game.

"Everyone was kind of all up in arms over the holding or whatever it was. And I said, ‘Just stay together. Stay on track’ picked up the first down & then we were rolling” pic.twitter.com/srvpz8ivlj

First, he stared down Ertz and floated a pass that was picked by Anthony Walker and returned to the Eagles 16. But the Colts only managed a 31-yarder by Vinatieri that gave them a 13-10 lead.

After Jake Elliott answered with a 24-yarder on the following drive, Margus Hunt knocked the ball out of Wentz's hands and recovered the fumble at the Eagles 13. Philadelphia's defense again held and Vinatieri made a 28-yard field goal to give Indianapolis a 16-13 lead.

"Those are things that can't happen," Eagles coach Doug Pederson said of the turnovers. "Overall, for his first time back, not so bad."

Wentz's return sent Super Bowl MVP Nick Foles back to the sideline. Foles replaced Wentz in Week 14 and led the Eagles to their first NFL title since 1960.

Undrafted rookie Josh Adams, the fifth-leading rusher in Notre Dame history, had 30 yards rushing on six carries for the Eagles. He was promoted from the practice squad earlier in the week.

Wentz avoided a sack, ran toward the sideline and dove out of bounds for a first down on third-and-6 on the final drive of the first half. ... Luck outran Eagles defensive lineman Chris Long for a 33-yard gain in the second quarter.

Eagles: S Rodney McLeod left with a right knee injury after colliding with teammate Mills in the third quarter. ... RBs Jay Ajayi (back) and Darren Sproles (hamstring) were out and WR Alshon Jeffery (shoulder) missed his third straight game.