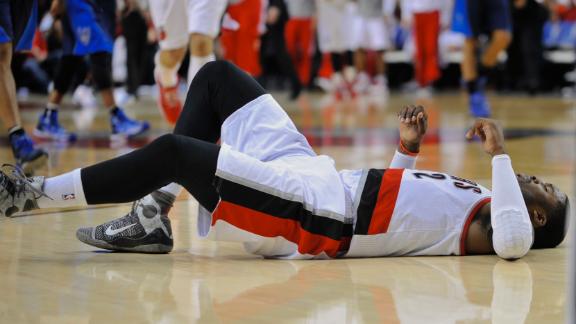 "It's disbelief, you know?" he told reporters after an MRI confirmed the rupture. "I'm sitting up there in that tube having an MRI, and I don't hear noise, I don't feel my Achilles, I'm just ... . I can't believe I'm up there while my team's battling. I just haven't processed all of it yet."

Matthews said he'll have to have surgery, but it has not been scheduled.

Matthews had to be helped off the court after suffering the injury in the Trail Blazers' 94-75 win over the Dallas Mavericks. He had four points, one rebound and three assists in 18 minutes before exiting.

He went down without contact when he attempted to drive two minutes into the third quarter. He immediately reached for his left Achilles as he grimaced in pain.

"I've made that same cut hundreds of thousands of times in my life," he said. "I felt the initial pop, and I think you guys could tell on the replay, I looked back, and it feels like someone kicked you. I was praying that someone was back there. No one was back there, and I heard Ron [Garretson], the ref, he actually says, 'Oh no' like he knew."

The mood was somber in the Trail Blazers' locker room as Matthews' teammates lamented the loss of the player fans call "Iron Man" for his toughness.

"It's tough, man. He's the heart and soul of this team; he brings a lot to this team," LaMarcus Aldridge said. "I've played with him seven, eight years now, so not having him out there is going to be tough."

Added Damian Lillard: "Wes plays harder than anybody on our team. It's hard for our team to think about not having him out there because of everything he brings to this team and the person that he is."

Matthews was third on the team with an average of 15.9 points per game, along with 3.7 rebounds and 2.3 assists for the Blazers this season. He started all 60 games.

The Blazers will look to Steve Blake, C.J. McCollum and newly acquired guard Arron Afflalo to stand in during Matthews' absence. The injury comes as the Blazers (41-19) fight for playoff position in the Western Conference. With the win over the Mavs, they remained in third place, a half-game up on the Houston Rockets.

"I'm frustrated, man. I'm frustrated," Matthews said. "They say everything happens for a reason, and I was thinking it, too. But what was the reason? I can't find it right now."

Matthews was fourth in the NBA with 173 3-pointers this season. He had 11 games with five or more 3s. In addition, with seven 3-pointers against Memphis in January, he passed Terry Porter for the most in team history.

Matthews is in the final year of a five-year, $34 million contract he signed in July 2010.

ESPNDallas.com's Tim MacMahon and The Associated Press contributed to this report.

Wesley Matthews Talks Torn Achilles
Trail Blazers starter Wesley Matthews talks about his torn left Achilles tendon, an injury he suffered during Portland's game against the Mavericks on Thursday that will sideline him for the rest of the season.