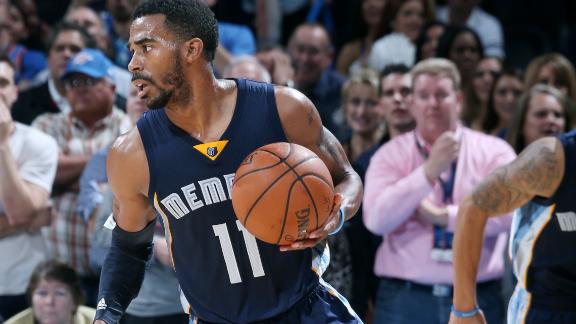 OKLAHOMA CITY -- One week after surgery on his broken right hand, Thunder point guardRussell Westbrook is upbeat about his recovery and trying to help his injury-riddled team find a way to survive without league MVP Kevin Durant and himself on the court.

Westbrook met with the media for the first time since suffering a small fracture early during the Thunder's Oct. 30 loss to the Clippers. He underwent surgery the following day and is expected to miss four to six weeks.

For the three-time All-Star, it was the fourth surgery in less than two years and another frustrating moment for one of the league's most mercurial competitors.

"I missed a shot and tried to come back up and get a rebound and I hit my hand on [teammate Kendrick Perkins'] elbow," Westbrook said. "I knew I hurt something. I thought I dislocated my finger or something. I couldn't tell until I got the ball back when I ran back down the court and couldn't dribble.

"I was already mad once I hit my hand because I knew it wasn't gonna be good, so I was instantly upset and frustrated. Obviously, I was ready to go and ready to help my team go out and get wins, especially since we were down some guys already. It was frustrating for me, but it'll be all right. I'll get back to where I was at."

Already hobbled by injuries to Durant and newcomer Anthony Morrow, the injury to Westbrook wasn't the end of the misfortune. Forward Perry Jones IIIand guards Jeremy Lamb and Reggie Jackson have also missed games, and rookie forwards Mitch McGary and Grant Jerrett have yet to begin their NBA careers due to injuries. On most nights, the team has had only eight available players.

The Thunder have been competitive in five of six games but saw their record fall to 1-5 after a 91-89 home loss to Memphis on Friday night. Oklahoma City has had to employ journeymen Sebastian Telfair and Lance Thomas in the starting lineup, and they recently picked up another well-traveled guard in Ish Smith.

Coach Scott Brooks is trying to stay positive while waiting for the return of his superstars, which will likely not come until January. Until they can get back on the court, Brooks is trying to keep Westbrook and Durant involved in encouraging the players who are trying to hold down the fort.

"He and Kevin are incredible encouragers during games," Brooks said. "They are cheering every possession and they get on guys during huddles when needed. They're involved, they're engaged, they want to make an impact while they're not playing, and that's good to see."

For his part, Westbrook is happy to play the part while he waits to return to the court.

"Just try to find a way that we can help guys," he said. "You don't wanna talk to nobody once you start the game because it gets annoying. You've got to find a way to get through to people even if it is off the floor, timeouts, whatever it is, just find a way to help the team out."