When position players take the mound 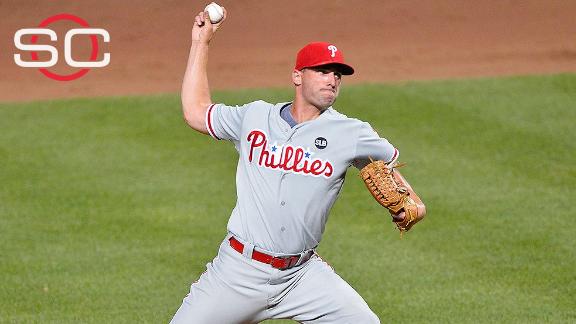 Nothing else turns a ho-hum baseball blowout into a must-watch event like seeing a position player pitch.

Whether the result is a disaster or a surprising success, it's always entertaining to see a player, who often times hasn't toed the rubber since high school, try his hand as a pitcher against major league hitters.

A rash of recent lopsided games led to six position players pitching over a two-day span Tuesday and Wednesday -- and got us thinking about some of baseball's most memorable position-player pitching performances.

Known for his cannon of an arm in right field, Jeff Francoeur always seemed a natural fit to take the mound at some point in his career, and in a 19-3 Phillies' loss to the Orioles, he finally got the chance. Francoeur entered in the seventh inning and retired the side in order, but thanks in part to an off-the-hook bullpen phone, Francoeur was left in to throw a total of 48 pitches and he gave up two eighth-inning runs before finally being relieved after a rocky second inning of work.

What's more entertaining than a position player toeing the rubber for the first time? When that position player is a 6-6, 285-pound slugger known as "The Big Donkey." Throwing a fastball that topped out at 83 MPH in his lone major league appearance, Adam Dunn allowed a run -- but provided plenty of entertainment -- in a 16-0 White Sox loss against the Rangers.

How do you make up for an 0-for-8 day at the plate? By getting the win in a 17-inning marathon, of course. Chris Davis did exactly that when called upon to pitch for the Orioles at Fenway Park on May 5, 2012, throwing two scoreless innings and even striking out Adrian Gonzalez in the process.

The first Twins position player to take pitch in over two decades, Michael Cuddyer worked his way out of a bases-loaded jam in a scoreless relief appearance and reached 88 MPH with his fastball.

You certainly can't blame Nick Swisher for the Yankees' 15-5 drubbing at the hands of the Rays on April 13, 2009. Not only did Swisher make it through his relief stint without allowing a run, he struck out Tampa Bay's Gabe Kapler and hit a home run of his own on an otherwise embarrassing day for the Yankees.

At first glance, Mark Grace's line from his 2002 outing with the Diamondbacks is nothing special (one run allowed in one inning), but nobody packed more entertainment into one relief appearance than Mark Grace. By doing a dead-on imitation of fellow D-backsMike Fetters, Grace deserves credit for finding a way to make his teammates laugh during a 19-1 loss.

Hall of Famer at the plate and knuckleballer on the mound? Yes, that's Wade Boggs. It took Boggs 16 years to finally convince a manager to let him pitch, but once he got the chance he certainly made the most of it, tossing a scoreless inning for the Yankees thanks to his fluttering knuckler. Boggs didn't have to wait nearly as long for his next pitching appearance, which he made as a 41-year-old for the 1999 Devil Rays.

Bad isn't a strong enough word to describe Jose Canseco's lone appearance on a major league mound. Then a member of the Texas Rangers, Canseco got a chance to pitch in a 15-1 blowout at Fenway Park. Though he did manage to get three outs in relief, Canseco walked three batters, allowed two base hits and gave up three runs -- and that isn't even the worst part. As a result of the damage to his arm from his 33-pitch outing, Canseco underwent Tommy John surgery less than two months after his outing.

Rocky Colavito's throwing arm was legendary during his career as a major league right fielder and that throwing ability seemed to translate to the pitching mound, too. Early in his career, Colavito was called on to relieve Hall of FamerHoyt Wilhelm in the second game of a doubleheader and proved quite competent in his three scoreless innings of work. But it wasColavito's outing a decade later that is even more memorable. Called on to pitch for the Yankees in the first game of a doubleheader, Colavito turned in a scoreless relief performance and earned an unlikely win on the mound as New York came from behind for a 6-5 victory over Detroit. Hours later, playing his traditional spot in right field, Colavito belted a home run against Tigers starter Mickey Lolich.

Yes, even being arguably the best pure hitter in baseball history doesn't exclude you from mop-up duty on the mound. Ted Williams isn't alone among the games' all-time greats who have taken to the hill at some point as Jimmie Foxx, Stan Musial and Ty Cobb all have thrown at least one inning during their legendary careers. The Splendid Splinter made his only pitching appearance on August 24, 1940, striking out a batter but allowing an earned run over two innings.