Whitner on QBs: 'They both can play' 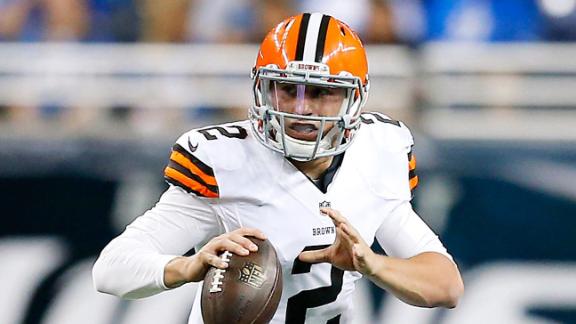 BEREA, Ohio -- The closest competition this side of Affirmed and Alydar -- Brian Hoyer versus Johnny Manziel -- continued on the practice field Monday.

How close is it?

Safety Donte Whitner told Sports Illustrated's MMQB that the locker room "is split about 50-50" and that the competition is "fierce."

This was not a statement about division in the locker room, but rather about how neither Hoyer nor Manziel has pulled away as the two compete to see who will start the season opener in Pittsburgh.

"I'm not concerned with that because I'm always going out there trying to prove to those guys that I am the guy," Hoyer said. "I've got to continue to improve and play better. Those decisions are over my head. Those are made by the coaches.

"I think you want to go out and earn your teammates' respect. I did a little of that last year. Now I'm trying to build that back up again this year."

Tight end Jordan Cameron said it would not be right to use the word "divided" when describing the locker room because it has a "negative connotation."

"I don't worry about what other players really think about the competition," Cameron said. "Whoever's the best player is going to play and that's all that really matters. Nothing else to say about it."

Manziel acknowledged that the competition has captured the attention of his teammates, but he agreed that it has not been negative.

"I don't feel any rift like that or anything going on in the locker room," Manziel said. "I think they see two guys coming out, playing football and competing as well as everybody else out on the field.

"Quarterback is obviously just a position that gets a lot of flash and gets a lot of attention, but at the same time, there's guys battling all around. I don't know if there's an exact split like that. It's not something I'm really aware of right now."

Said Whitner: "We know they both can play."

The QBs didn't have their best practices Monday as coach Mike Pettine kept them out in the rain. Manziel unofficially finished 10-of-21 passing -- his first day in a week below 50 percent.

Pettine said there was no change from Sunday, when he said Hoyer is ahead but Manziel is improving.

"If there was a significant change in the depth chart, it would have been reflected on the field," Pettine said.

Browns Mixing Reps Between Manziel, Hoyer
Browns coach Mike Pettine and QBs Johnny Manziel and Brian Hoyer discuss their expectations for Monday night and who will likely get the start against the Redskins.