Why Ben Simmons might be the best all-around rookie ever 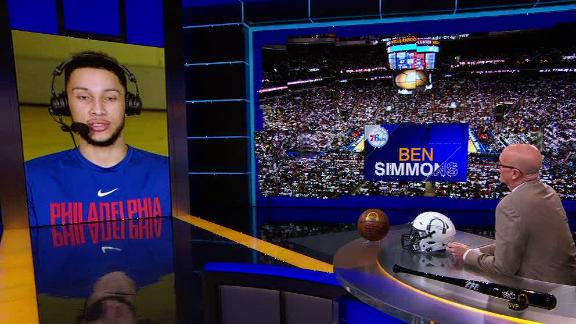 Ben Simmons has proven worth the wait. After missing the entire 2016-17 season with a Jones fracture of the fifth metatarsal in his right foot suffered in training camp, the No. 1 overall pick of the 2016 draft has made a difference in a variety of manners during his delayed rookie season.

In helping the Philadelphia 76ers to a 7-6 start, Simmons leads all rookies in points (17.8), rebounds (9.2) and assists (7.5) per game. It took Simmons just four games to record his first career triple-double, and per Basketball-Reference.com, his two triple-doubles are already as many as any rookie has posted since Lamar Odom had three in 1999-2000.

Based on those stats, it's worth asking whether there has ever been a rookie -- including LeBron James -- as versatile as Simmons.

Versatility was certainly key to Simmons' appeal as a prospect. At 6-foot-10, he's comfortable operating as a primary ball handler, and Sixers coach Brett Brown was adamant from Day 1 that Simmons would be his point guard. That has proven true.

According to Second Spectrum data on NBA.com/Stats, Simmons' 7.0 minutes per game with the ball in his hands ranks 10th in the NBA. The other players who handle the ball more than five minutes per game average between 6-foot-2 and 6-foot-3 in height, and James is the only other player taller than 6-foot-7 in this group.

That size enables Simmons to make passes other point guards are incapable of delivering. That's most notable with Simmons' crosscourt passing, a skill exceeded only by James. However, it also seems to have worked to Simmons' benefit passing out of crowds in the paint. According to Second Spectrum analysis, Simmons has made a league-high 31 passes from the paint to set up 3-pointers, which 76ers teammates have converted at an impressive 48.5 percent clip. Overall, Simmons' 14.5 potential assists per game rank fifth in the NBA, heady stuff for a rookie point guard.

While Simmons serves as a point guard on offense, at the other end he has defended all types of players, giving Brown incredible defensive flexibility. Simmons has defended 95 pick-and-rolls as the screener defender and 127 as the ball-handler defender, per Second Spectrum data, making him one of just three players in the NBA (combo forwards Jeff Green andP.J. Tuckerare the others) to defend at least 90 of each.

If Simmons has a natural position defensively, it's power forward, and his defensive stats reflect this. He's an above-average rebounder for a 4 and blocks shots at nearly a typical rate for a power forward.

The breadth of Simmons' contributions has helped overcome the fact that -- like most rookies asked to do so much -- he hasn't been particularly efficient offensively. Simmons has yet to make a 3-pointer and has shot just 37.1 percent on shots from beyond the restricted area, so his .524 true shooting percentage is worse than league average (.553). Yet Simmons leads all rookies with 1.5 wins above replacement player (WARP) by my metric; Jayson Tatum of the Boston Celtics (1.0) is the only other rookie rated as worth even one WARP.

Simmons and the versatility index

So how can we compare Simmons' versatility to that of other rookies? Back when he was writing for SI.com, my ESPN Insider predecessor John Hollinger introduced the versatility index to rate players' production in the three key box-score statistics (points, rebounds and assists per game). The versatility index multiplies the three, then takes the cube root (the geometric mean) so as to emphasize performing well in all three categories rather than dominating a single one.

Subsequently, Kyle Wagner of sister site FiveThirtyEight has modified versatility index to utilize points, rebounds and assists per 100 possessions instead of per game, useful with pace increasing rapidly. Because his scoring has been unexceptional, Simmons ranks eighth in this measure. (Note that I'm actually using per 100 team plays, as contrasted to Basketball-Reference.com's measure per 100 possessions, where an offensive rebound starts a new play but not a new possession.)

Intriguingly, no player this season has been better at all three categories than Simmons. That serves him well in comparison to other rookies since the ABA-NBA merger:

Simmons comes ahead of all the big names to enter the NBA in the past four decades, many of whom achieved versatility index scores of 11.0 or better as rookies. Notable in his absence is James, who averaged 6.3 rebounds and 6.7 assists per 100 plays as a rookie. James improved rapidly in both categories, and by the time he reached Simmons' age (2005-06, James' third NBA season), his versatility index had improved to 12.4, slightly better than Simmons is doing now.

Because we don't have team pace before 1973-74, when turnovers were first tracked, we'll have to switch to the original per-game version of versatility index to compare Simmons to the greats of the 1950s and 1960s.

Simmons drops to seventh on this list. However, it's worth remembering what we do know about the NBA in the 1960s: the pace of play was far faster than it is today. Players also played far more minutes per game -- Robertson averaged 42.5 as a rookie, compared to 34.3 for Simmons.

Basketball-Reference.com does estimate pace for pre-1973-74 teams, and applying this to Robertson's stat line as a rookie suggests he averaged 25.0 points, 8.3 rebounds and 8.0 assists per 100 possessions -- far fewer rebounds and assists than Simmons on a per-possession basis, despite the fact he nearly averaged a triple-double. That gives Robertson a per-100 versatility index of 11.8, worse than Simmons' 13.0 mark.

At some point, comparing players more than five decades apart becomes challenging. Scorers awarded assists less frequently in the 1960s than they do today, and the faster pace made it more difficult for a single player to dominate as much of the offense as in the modern game. So you're well within your rights to stick with Robertson's rookie season as the most versatile ever. But there's reason to believe Simmons may be the most versatile rookie we've ever seen.