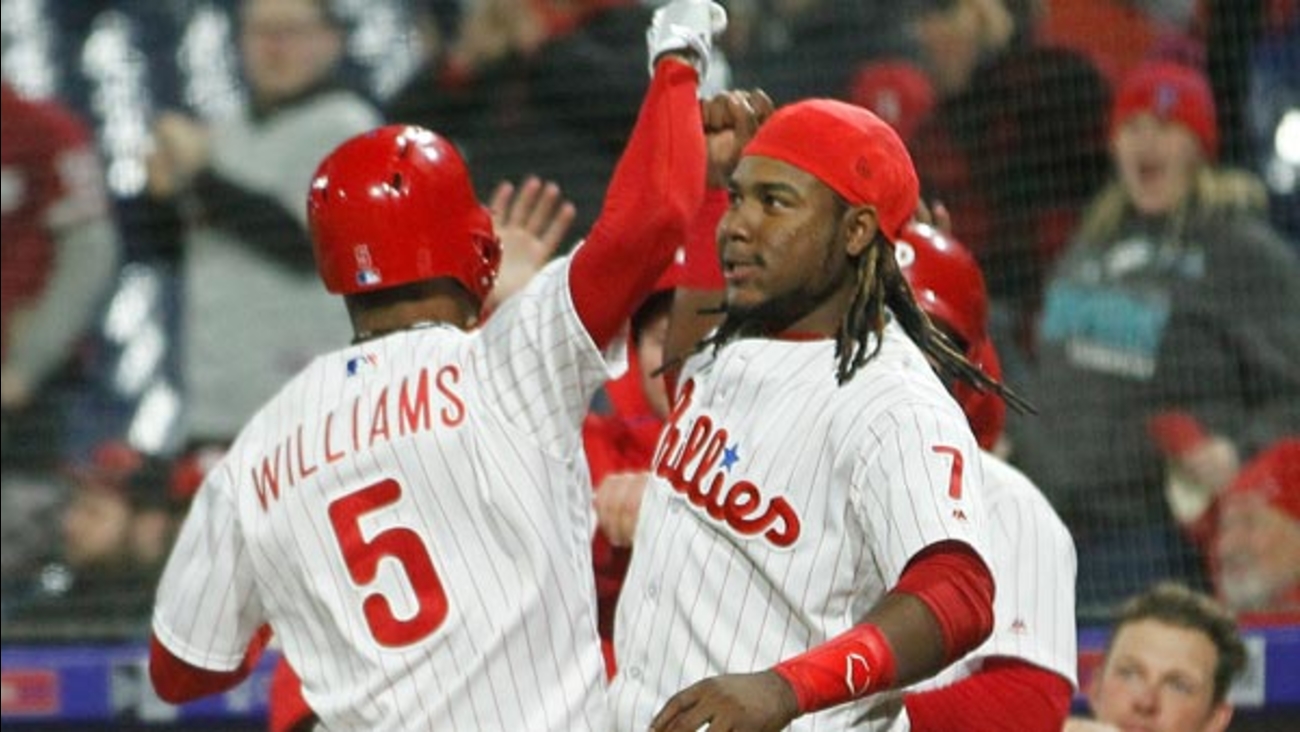 Phillies' Nick Williams, left, is greeted at the dugout after hitting a solo home run during the eighth inning against the Cincinnati Reds, April 9, 2018, in Philadelphia. (AP Photo/Tom Mihalek)

Williams hit a tiebreaking solo homer as a pinch-hitter in the bottom of the eighth inning to lift the Philadelphia Phillies to a 6-5 victory over the Cincinnati Reds on Monday night.

Scott Kingery homered for the first time in his career and Rhys Hoskins also went deep for the Phillies.

A moment fit for a King. 👑 pic.twitter.com/jE8pCDgWwK

Tucker Barnhart hit a two-run homer for the Reds.

Williams drove a 3-1 pitch deep into the right-center field seats off Kevin Quackenbush (0-1) for his first career pinch-hit homer. A notorious first-pitch swinger, Williams took a breaking ball out of the strike zone and let a fastball go with the green light on a 3-0 count.

"I had a plan and I told myself I'd stick with it," Williams said. "I took one and when he threw it again, I did some damage."

Manager Gabe Kapler was impressed with Williams in batting practice.

"When he took 3-0, you knew he felt really comfortable," Kapler said. "He picked a pitch to drive and did a great job."

Luis Garcia (1-1) tossed a scoreless inning in relief for the win and Hector Neris finished for his first save.

The Phillies have won three of four while the Reds have dropped four of five.

Hoskins gave Philadelphia a 2-1 lead in the first when he ripped a line drive into the left-center field seats. Kingery connected in the second to make it 3-1, sending a liner into the flower bed above the left-field wall.

"The win makes it that much better," Kingery said.

After Barnhart's homer tied it at 3-3 in the third, Carlos Santana's RBI double and Maikel Franco's sacrifice fly in the bottom half put the Phillies ahead 5-3.

Scooter Gennett lined an RBI double in the fourth and Billy Hamilton drove in the tying run with an infield single in the sixth. Hamilton tried to score from second base on reliever Adam Morgan's wild pitch, but catcher Jorge Alfaro threw to the pitcher covering the plate in time for the out.

"What an athletic play," Kapler said.

The Reds opened the scoring in the first when Adam Duvall walked with the bases loaded, but Ben Lively pitched out of the jam. Barnhart lined out to shortstop and Phillip Ervin and Cliff Pennington struck out.

"It was a big opportunity and we weren't able to tack on," Reds manager Bryan Price said. "It was a chance to put up a big number and nothing really went our way after that."

Reds righty Hunter Greene, the No. 2 overall pick in the 2017 amateur draft, had eight strikeouts in three innings in his first start with Class A Dayton. He allowed two runs and five hits.

Reds first baseman Joey Votto hustled after a foul ball to prevent it from rolling to a fan. He was booed all night.

Reds: 3B Eugenio Suarez (fractured right thumb) and OF Scott Schebler (right ulnar nerve contusion) were placed on the 10-day disabled list. Both were injured when they were hit by pitches. Schebler's stint is retroactive to April 6.

RHP Homer Bailey (0-2, 4.22 ERA) starts for the Reds while RHP Aaron Nola (0-0, 2.61 ERA) goes for the Phillies on Tuesday night. Bailey is 1-4 with a 3.97 ERA in 10 starts vs. Philadelphia. Nola is 1-1 with a 3.15 ERA in three starts vs. Cincinnati.
------
Send a News Tip to Action News
Learn More About 6abc Apps
Report a correction or typo
Related topics:
sportsaction news sportsphiladelphia phillies
Copyright © 2020 by The Associated Press. All Rights Reserved.
PHILADELPHIA PHILLIES 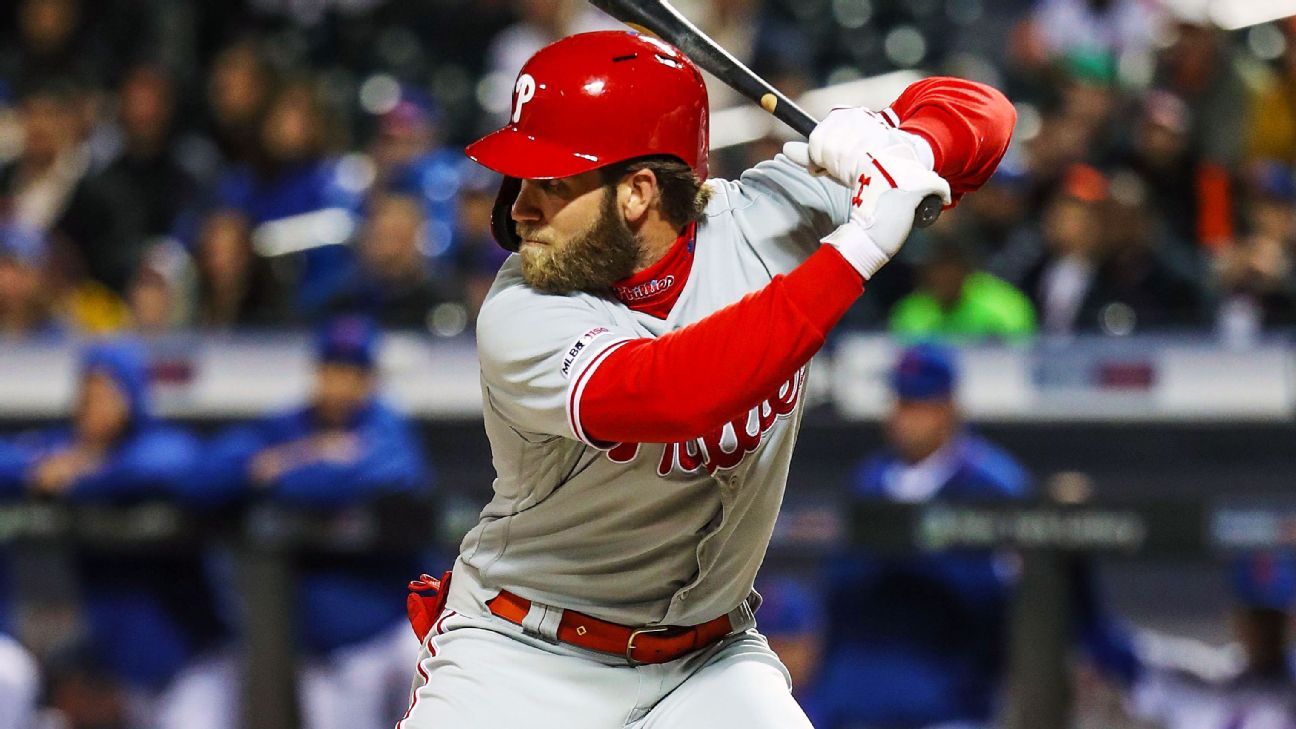 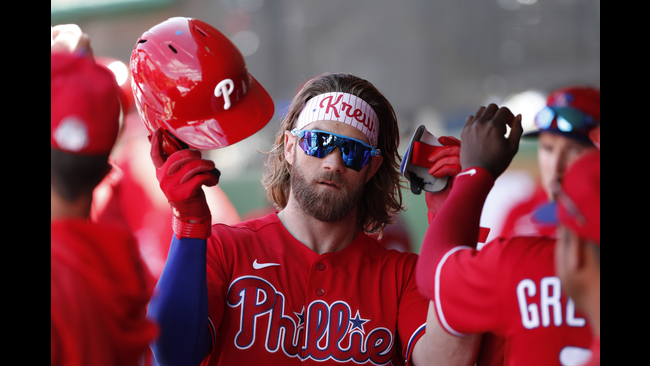