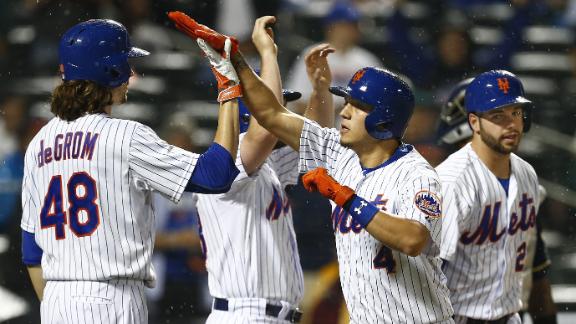 NEW YORK -- Wilmer Flores arrived at Citi Field and saw he had been dropped to the bottom of the batting order, even below pitcher Jacob deGrom. The pair made Terry Collins' grand idea look like genius.

The Mets manager slotted New York's top home run hitter ninth in the batting order for the first time in nearly a half-century and batted his pitcher eighth for the third time this season.

Flores responded with a grand slam off Matt Garza that sparked a 10-run fourth inning in a 14-1 romp over the Milwaukee Brewers on Saturday night that stopped New York's five-game losing streak.

New York had totaled 10 runs during its skid.

"We finally woke up," Flores said.

DeGrom was 3-for-3 with three singles -- including two in the big inning. He became only the second pitcher since at least 1914 to have three hits in the No. 8 hole, according to STATS, following St. Louis' Adam Wainwright against Atlanta on Aug. 22, 2008. And deGrom picked an appropriate time for the hat trick -- it was fedora giveaway night at Citi Field.

"That was fun," deGrom said with a wide smile. "Just trying to get up there and hit the ball hard, and they found holes."

With the game scoreless in the second inning, runners at first and second and one out, deGrom punched a first-pitch, go-ahead hit as Milwaukee anticipated a bunt.

"I saw that the infield was kind of shifted over, so I was just trying to hit the ball in the middle of the field," deGrom said.

DeGrom laughed about whether a few more big days at the plate could earn an even higher spot in the batting order.

Kevin Plawecki, who sat out Friday because of a sinus infection, hit a RBI grounder to shortstop in the fourth as Michael Cuddyer slid home ahead of shortstop Luis Sardinas' off-line throw, and deGrom loaded the bases with his second hit. Wearing neon orange batting gloves, Flores drove a 94 mph fastball over the 370-foot sign and into the left-field party deck, an area where the Mets brought in the fence before the 2012 season. He became the first starting NL position player to hit a grand slam from the No. 9 hole in an NL ballpark, STATS said.

"He did something right, that's for sure," Collins said.

Flores' sixth home run this season, which tied a career high set last year, put the Mets ahead 6-0. It was his third homer in the past six games after hitting three in his first 26 games.

The shortstop had been struggling, entering with nine errors -- tied for third in the major leagues.

"It's got to help him," Collins said. "He's going to put up big offensive numbers. With the defensive side, I think he's really been pressing at the plate a little bit."

New York had nine hits and sent up 15 batters in the 32-minute bottom of the fourth, its highest-scoring inning since a club-record 11-run sixth against the Chicago Cubs at Wrigley Field on July 16, 2006.

New York's top home run hitter had not been ninth in the order since April 30, 1967, in a doubleheader opener at Cincinnati, according to STATS. Don Cardwell, New York's starting pitcher that day, was in a seven-way tie for the Mets' home run lead with one. Flores became the Mets' first outright home run leader to hit ninth.

New York tied therecord for runsby a team at Citi Field, which opened in 2009, and had a season-high 16 hits on a night the teams played through intermittent rain.Their 10-run inning is the most runs they've scored in an inning since July 16, 2006, according to ESPN Stats & Information.

"It's not like he's Giancarlo Stanton," the manager said. "He's got power, and he's hit five homers, but if you want to pitch around him to pitch to Curtis Granderson, I'll take that."

Cutting down on his stride, deGrom (4-4) limited the Brewers to five hits in six innings, giving up his only run on Ryan Braun's sixth-inning sacrifice fly. He is 9-1 with a 1.32 ERA in his past 11 home starts.

"It was a big night," deGrom said. "Everything came together."

New York, which totaled 10 runs during the losing streak, has held sole possession of the NL East since April 16, but its margin was down to just a half-game.

Luis Sardinas, who turned 22, made his Brewers debut and went 2-for-3, including singles in his first two at-bats. Scooter Gennett was 0-for-3 and is hitless in 15 at-bats and 1 for his past 23.

Both teams batted starting pitchers eighth for the fourth time in the big leagues this season. According to STATS, it happened on 11 others times since 1914, all in 2008.

With Dilson Herrera on the DL after breaking a finger Friday, Daniel Murphy played second for the first time since April 30. Eric Campbell started at third. He arrived on a red-eye at 6 a.m. following his recall from Triple-A Las Vegas.

Brewers: Ramirez started his second straight game at 3B after missing six in a row because of a stiff lower back.

Mets: Manager Collins said 3B David Wright, sidelined by a hamstring injury since April 14, was due to complete his final day of back therapy and could be cleared to start baseball activities Monday. ... RHP Dillon Gee (groin strain) allowed one run and six hits in four innings for St. Lucie against Charlotte, throwing 54 pitches and striking out seven, RHP Vic Black (herniated neck disk) threw 21 pitches in one inning, and RHP Bobby Parnell (elbow surgery) allowed one run and one hit in an inning while throwing 28 pitches.

Brewers: Wily Peralta (1-4) starts Sunday's series finale. He is 3-0 against New York but batters have a .301 average against him this year.