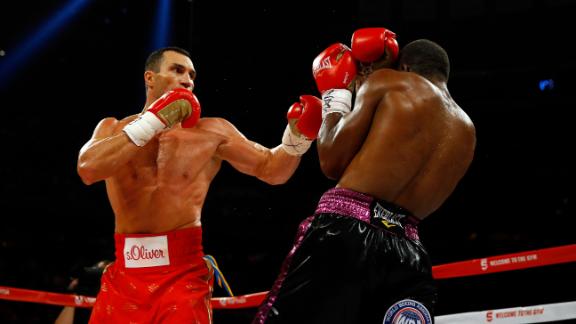 NEW YORK -- Heavyweight champion Wladimir Klitschko was not at his devastating best and less effective than he had been in a long time, but it did not make much of a difference.

Klitschko still cruised to a lopsided decision in a fan-friendly fight against Bryant Jennings to retain the title for the 18th time before a raucous, pro-Klitschko crowd of 17,056 on Saturday night at Madison Square Garden.

Klitschko's 18 consecutive defenses of his second title reign are third all time in division history behind only Larry Holmes (20) and Joe Louis (25, which is the record for any weight class). But Jennings, who didn't put on a pair of boxing gloves until 2009, made him work for it with a scrappy performance.

"Very competitive opponent, [better] than I have faced in recent years," Klitschko said. "Great hand speed, great footwork, very athletic. He was even talking between the rounds and trying to make it like [Muhammad] Ali-[Joe] Frazier. He gave a great challenge, and he will give the heavyweight division a lot of good challenges."

Klitschko (64-3, 54 KOs) looked a bit vulnerable at times, but Jennings (19-1, 10 KOs), facing a three-inch height deficit and a 15-pound weight disadvantage, could never get into any kind of offensive rhythm while Klitschko went to his calling card jab to keep control of the fight.

Klitschko moved to 25-2 in world title fights. By participating in his 27th world heavyweight title bout, he tied the great Louis for most in division history.

Klitschko was returning to fight in the United States -- as well as Madison Square Garden -- for the first time since February 2008, when he easily outpointed Russian Sultan Ibragimov to unify two titles.

"I feel great to be back after a seven-year break," Klitschko said. "Fans from all over the world also love to come to the States and see the fight at the Garden. It was a great experience."

The fight with Ibragimov was a dreadfully boring fight, but the fight with Jennings was far more entertaining, as Klitschko was offensive-minded and Jennings showed great will and desire.

"It was the confidence that they all question me about. I'm a man and he's a man, and when we get [in the ring] that's what we're here to do," Jennings said. "This is a sport and we come to fight and come to put it all on the line, and we accept any outcome -- win, lose or draw."

In the lead-up to the bout, Klitschko had compared Jennings, 30, of Philadelphia, to fictional Philly heavyweight Rocky Balboa, the underdog who won the title in the famous films.

It was something Jennings embraced, and he tried to make the most of his opportunity.

Jennings tried to go to Klitschko in the opening round but was met with a stiff jab in his face, and right away it looked like he would have a hard time getting inside on his much bigger opponent.

Jennings tried to connect with an overhand right in the second round, but it missed by a mile. Klitschko's answer was to triple up on his jab and force Jennings back. Jennings moved around, looking for any way to get close to Klitschko, but to no avail.

With his fiance Hayden Panettiere, the actress and mother of his newborn daughter, cheering him on at ringside, Klitschko connected with a right hand midway through the third round that seemed to briefly hurt Jennings.

After Klitschko nailed Jennings with a jab in the fifth round, Jennings taunted Klitschko, shouting at him, "Hit me." So he did.

Jennings landed a hard right hand in the sixth round -- his best punch of the fight to that point -- that got Klitschko's attention, but Klitschko finished the round backing Jennings up and firing jabs at him.

He wasn't using his right hand as often as usual, which he was questioned about after the fight.

"My right hand is OK. Bryant didn't give the chance to throw the right hand as much as I wanted," Klitschko said. "It was the Philly style like [former challenger] Eddie Chambers [had], with a lot of body movement."

Jennings continued to talk to Klitschko in the seventh round, but Klitschko responded with punches while Jennings smiled. Jennings knocked Klitschko off balance midway through the ninth round to excite the crowd but he could not mount any kind of sustained rally. Klitschko answered with a powerful right hand.

Referee Michael Griffin took a point from Klitschko for holding early in the 10th round. It's a tactic Klitschko often uses and Griffin had previously warned him about.

"It is what it is. I don't want any complaints," Klitschko said. "Sometimes, when a fighter is shorter than you, things like that happen."

Said Jennings: "Every time I started working, he held me. He rapped me a couple of times. I thought the scores were way too wide. When he was holding me, I was hitting him to the body. I must have hit him with about 100 body shots. Not much to the head, though. I thought the margins should have been closer."

Jennings went for a knockout in the 12th round, trying to attack Klitschko, but the champion answered with a steady diet of punches to his face. But Jennings' great effort surely made him some new fans and earned respect from Klitschko, who rocked him with a clean right hand in the waning seconds of the fight.

Klitschko's next fight probably will come against mandatory challenger Tyson Fury (24-0, 18 KOs), 26, of England, in what will be a huge fight in England or Germany. The mandatory is due next, and Bernd Boente, Klitschko's manager, said that they would look to make a deal for that fight, probably this fall.

While the fight with Jennings may not have been Klitschko at his crushing best, it was still a lopsided fight, like all of his title defenses have been for nearly a decade.

"I am happy with Wladimir's performance," said Johnathon Banks, Klitschko's trainer. "I would have rather seen a knockout, but he won the fight in dominant fashion."