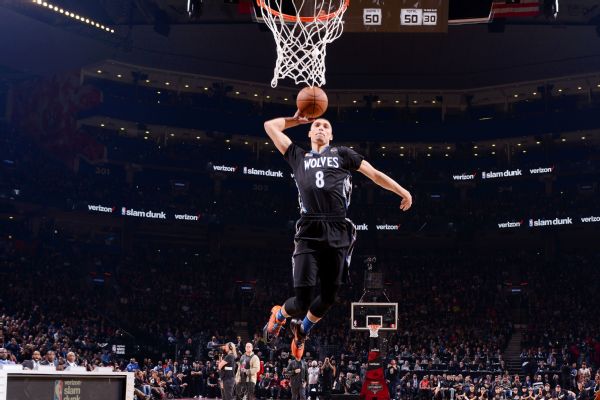 ESPN
MINNEAPOLIS -- The NBA dunk king is giving up his crown.

Minnesota Timberwolves guard Zach LaVine said he will not compete in this year's slam dunk contest at All-Star weekend in New Orleans, meaning he will not try for an unprecedented third straight title in one of the league's signature events.

"I feel like I've accomplished everything I could in the dunk contest," LaVine said Thursday as the Wolves prepared to face the Indiana Pacers. "It would be hard for me to go back and outdo myself.

The 21-year-old LaVine breathed new life into a stale event two years ago, when he came in as a rookie and blew away the field in New York with a breathtaking array of soaring dunks. He followed that up in Toronto last year with an epic duel against Orlando's Aaron Gordon that went into overtime.

LaVine won the contest when he went between his legs from a step inside the free throw line, a dunk he had never attempted before in practice or a contest. LaVine said winning the showdown with Gordon took every dunk he had, and it was time to turn his concentration to other pursuits.

"I'm never saying I won't ever do it again, but I'm focused on this year," he said. "We're getting close to being able to make the playoffs and we have that in our mind. Getting the rest and just focusing more on just the game is the main thing."

The Wolves (17-28) have won three in a row and six of their last eight heading into the game against the Pacers. They are in 12th place in the Western Conference, but just 2+ games behind Denver for the eighth and final playoff spot.

LaVine's emergence as a budding star has been pivotal this season. He is averaging 19.2 points per game and is shooting 40.2 percent from 3-point range, proving that he is more than just a super-athletic dunker. He is averaging 37.1 minutes per game, with new coach Tom Thibodeau entrusting him both as a starter and as the primary scorer when the second unit comes in.

LaVine said stepping away from the dunk contest will help keep his legs fresh, especially after he missed a couple of games recently with tightness in his hip.

"Going out there and trying to put a routine together to dunk is tough sometimes," he said.

Thibodeau has never been one for the flash and frills, so he was encouraged to see that LaVine has put his focus elsewhere.

"He's done a lot more than just be a dunker. His shooting; his playmaking; all that stuff," Thibodeau said. "But the big thing is weighing whether the rest is more important to be ready for the second half of the season. So I don't want him putting a lot of time and thought into that. I want him thinking about what we have to do tonight. ... Prioritizing winning and our team is the most important thing and I think he'll do that."