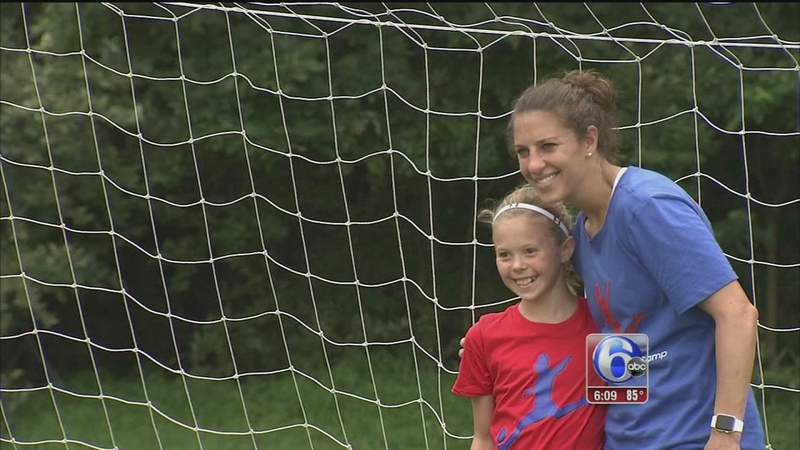 When Natalie Swan from Mt. Holly found out she got one of the 200 spots, she was more than excited.

"I was dreaming so I pinched myself and I guess it was actually real," said Natalie.

The girls practiced foot skills, passing, and shooting at the Medford Strikers Soccer Club - where the 33-year-old midfielder got her start years ago.

"It's nothing glamorous. It's got some nets, it's got some cones, grass, and that's basically where everything happens at this field. We do everything here. It's good to come back. It's my home. This is my comfort level," said Lloyd.

Lloyd is also comfortable on the world stage where she scored a hat trick in the World Cup final against Japan two weeks ago.

Since then, life has been a whirlwind. But she says it's important to build the sport by mentoring the next generation.

"I love doing appearances at other places and getting dressed up and glammed up, but at the end of the day this is home to me and it's great that I was able to do another camp and help to inspire younger players," said Lloyd.

Her trainer, James Galanis, runs the camp. He puts the girls through the same drills that Lloyd does.

"They're not just coming in here and having fun, they're actually putting themselves through the environment that has made Carli into the player that she is," said Galanis.

While playing soccer with Lloyd was amazing in and of itself, the girls say the fact that she's from South Jersey is just the icing on the cake.

"It means a lot because a lot of good players are from everywhere else and it's cool that Carli Lloyd is from New Jersey," said Isabella Zaleseik.

So what's next for Lloyd?

Maybe another World Cup with Team USA and the 2016 Olympics in Rio.

But her campers say all those big plans haven't changed her one bit.