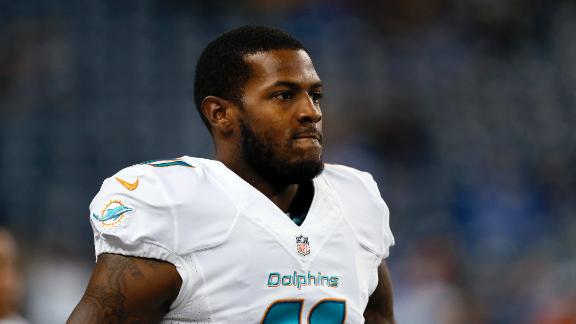 MINNEAPOLIS -- The Minnesota Vikings filled a significant need in their offense Friday, acquiring wide receiver Mike Wallace and a 2015 seventh-round draft pick from the Miami Dolphins for a fifth-round pick this year.

The trade was made before the Dolphins had to pay Wallace's $3 million bonus this weekend.

Responding to Friday reports that he was not happy to be traded to Minnesota, Wallace told reporters over conference call, "Yeah, I'm excited. That's not really true, because I didn't even tell anybody that. I don't know where that kind of came from. A lot of people always put words in my mouth. Nobody ever heard me say that. I don't have any problems with being here. I'm excited for a fresh start."

Wallace nearly signed with the Vikings as a free agent in 2013 but ultimately chose the Dolphins, in part because of the South Florida weather."I definitely considered it," he said about signing with Minnesota. "It was just, the cold factor was big at that time, with the opportunity to play in Miami. It was palm trees versus trees with no leaves. That was then. This is now. I'm excited to be here."

Wallace led the Dolphins in receiving yards (862) and touchdowns (10) and was second in receptions (67) this past season. He joins a Vikings team that was on the hunt for playmakers after completing just 17 passes of 20 yards or more. According to ESPN Stats & Information, that was tied for the seventh-lowest figure in the league.

"We want to have a lot of speed offensively, and we feel like that will help a lot," coach Mike Zimmer told ESPN, as he walked into dinner with former Tampa Bay Buccaneers defensive end Michael Johnson, who is visiting the Vikings this weekend. "With [Vikings receiver] Charles Johnson, it opens up more things for the runners, it opens up more things for the tight end. And with [quarterback] Teddy [Bridgewater], you know, he plays so damn accurate. It opens things up."

Wallace fell out of favor in Miami following a Week 17 sideline altercation in a loss to the New York Jets. He was benched in the second half, which raised questions about his future with the team.

"Honestly, it was a conversation between me and Coach [Joe] Philbin that we left there, and I will always leave there. But I would never, ever, in a million years, quit on my game," Wallace said about that Week 17 incident. "...We both know exactly what happened. I'll never take myself out of a game."

Wallace also struggled at times to get on the same page with quarterback Ryan Tannehill, who wasn't consistent in throwing deep passes to the speedy Wallace. According to ESPN Stats & Information, Tannehill threw more interceptions than touchdowns (seven to five) when targeting Wallace in 2013, although that ratio turned around significantly in 2014 (one INT, 10 TDs).

Miami traded for former New Orleans Saints receiver Kenny Stills earlier Friday, which made Wallace expendable. He was scheduled to make $9.9 million in 2015.

Wallace initially inked a $60 million contract with the Dolphins in 2013 after spending his first four seasons in the league with the Pittsburgh Steelers. It remains to be seen whether the Vikings will try to rework Wallace's contract. Greg Jennings, who the Vikings signed in 2013 after missing out on Wallace in free agency, was released by the Vikingson Saturday.

Wallace said he intends to play out his contract as it was agreed upon and signed. "I was traded as-is, in my contract. We didn't discuss anything like that," he said about a reworked deal.

"We felt like there was a need that we had [at wide receiver]," Zimmer said. "[Offensive coordinator] Norv [Turner] really liked him, and I played against him when he was in Pittsburgh and now Miami. He's so fast, and he's a quick starter -- he can really get going fast."

The Dolphins are in the process of overhauling their entire receiving corps. In addition to trading Wallace, Miami also released former starter Brian Hartline and slot receiver Brandon Gibson. The trio accounted for 135 receptions, 1,631 yards and 13 total touchdowns in 2014.

About missing out on being a teammate of the just-departed Jennings, said, "It's unfortunate I'm not going to be able to get a chance to play with him. I think he's a great player, but I'm excited about the guys that are here."

Information from ESPN.com's James Walker and ESPN NFL Insider Adam Schefter was used in this report.