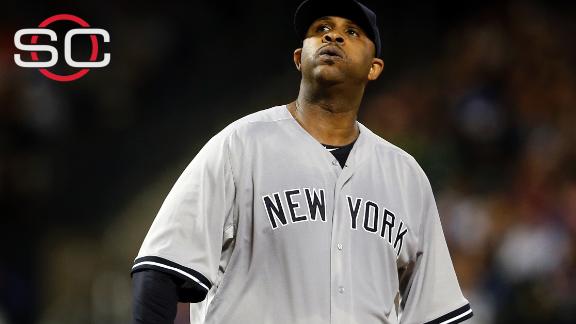 ESPN
New York Yankees pitcher CC Sabathia is checking himself into an alcohol rehabilitation center and will miss the postseason, he announced Monday.

"Today I am checking myself into an alcohol rehabilitation center to receive the professional care and assistance needed to treat my disease," Sabathia said in a statement."I love baseball and I love my teammates like brothers, and I am also fully aware that I am leaving at a time when we should all be coming together for one last push toward the World Series.

"It hurts me deeply to do this now, but I owe it to myself and to my family to get myself right. I want to take control of my disease, and I want to be a better man, father and player."

The Yankees host the Houston Astros in the AL wild-card game Tuesday night.

"CC has demonstrated a great deal of courage in trying to tackle this problem," Yankees general manager Brian Cashman said. "Time and place have no bearing. There is something here that needs to be taken care of, and I applaud him."

Cashman said he was informed of Sabathia's decision via an "unexpected" phone call with the pitcher and others.

"What CC is dealing with is a life issue," Cashman said. "It is bigger than the game [Tuesday] night."

However, the 2007 Cy Young Award winner and six-time All-Star had been pitching better of late. After a poor four-month stretch to start the season that saw his ERA in the mid-5s, Sabathia settled down to have a 3.80 ERA in August and closed the season with a 2.17 ERA in September.

"As difficult as this decision is to share publicly, I don't want to run and hide," Sabathia said. "But for now please respect my family's need for privacy as we work through this challenge together."

Sabathia, who thanked the Yankees for their "encouragement and understanding," said he intends to be back with the Yankees next season.

"Being an adult means being accountable. Being a baseball player means that others look up to you. I want my kids -- and others who may have become fans of mine over the years -- to know that I am not too big of a man to ask for help," Sabathia said. "I want to hold my head up high, have a full heart and be the type of person again that I can be proud of. And that's exactly what I am going to do."

"I give CC a lot of credit because it takes a lot of courage for someone, a man, to step up and say, 'I need help,' " Girardi said.

Girardi, like Cashman, said that Sabathia did not indicate there was a tipping point incident.

In August, Sabathia was involved in a shouting altercation caught on video in Toronto in August. His friends pushed him into a car before a brawl ensued outside of nightclub. At the time, Sabathia said he just "flipped out." Though Cashman said he saw no warning signs, he said that situation was "uncharacteristic."

"I can't honestly tell you if alcohol was or wasn't involved in that incident," Cashman said.

Sabathia's teammates stood behind him. Sabathia and Alex Rodriguez are two of the leaders on the Yankees. The two were the most important players in the Yankees' last championship run in 2009.

"We play for CC now," Rodriguez said. "CC has gone to the mat for us many, many times. I know me personally and lot of us in here, we wouldn't have a ring if it weren't for CC."

Sabathia, if the Yankees advance past the wild-card game, would have probably started one of the ALDS games against the Kansas City Royals. As it stands now, the rotation likely will be rookie Luis Severino, Michael Pineda, Adam Warren andMasahiro Tanakaif theYankees beat the Astros. Tanaka will start against Houston in the wild-card game

Nathan Eovaldi is rehabbing his forearm, but if he comes back, he would only return as a reliever because he is not stretched out.

The Yankees expect Sabathia to return for spring training in February. He is scheduled to make $25 million next year. If he does not hurt his shoulder, an option will kick in for another $25 million in 2017.

Following Monday's news conference, Major League Baseball released a statement to address the beer-sponsored signage that served as the backdrop for Girardi and Cashman's comments.

"CC Sabathia made an important life decision and we are fully supportive of his seeking treatment," MLB said in a statement. "This situation involving an individual player should not in any way impact baseball's relationship with Budweiser, a longtime valued partner that constantly promotes drinking responsibly."

Information from ESPNNewYork.com's Andrew Marchand and The Associated Press contributed to this report.