Yankees GM: 'Didn't rehash the past' 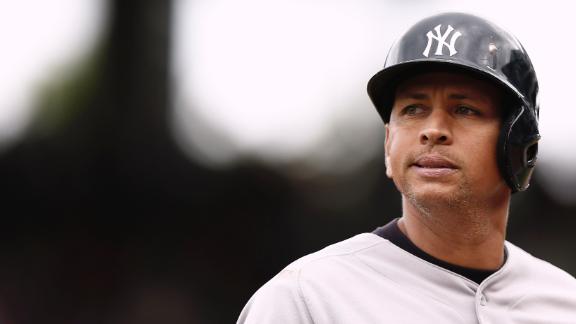 BOSTON --Derek Jeter will take his final at-bat on Sunday. Who is waiting in the on-deck circle? Alex Rodriguez.

With that in mind, Yankees general manager Brian Cashman recently contacted the suspended Rodriguez to map out a plan for Rodriguez's return in 2015.

"I spoke to Alex about 10 days ago, trying to get his thought process on the best way to come back," said Cashman, who had declined to comment on Rodriguez all season.

Cashman asked Rodriguez if he thought playing winter ball might be an option after the year off. Rodriguez did not want to pursue that avenue, which Cashman described as "fine" and there was "no issue" with the decision. Cashman added he needed to look into insurance implications of winter ball on the final three years and more than $60 million remaining on Rodriguez's contract and merely raised it to A-Rod as a possibility, not an imperative.

Rodriguez, 39, left much bad blood with the Yankees after the Biogenesis investigation led to his season-long suspension for performance-enhancing drugs. Among other things, Cashman told Rodriguez to "shut the f--- up" and A-Rod sued the team doctor and Major League Baseball. Rodriguez later dropped the suits.

Cashman said bygones will be bygones.

"I just approached it as, like any player, I've got questions I need answered here on what's best going next and I needed the player to be involved in the process," Cashman said. "So we had a good conversation on that end. I would term it 'good.' I didn't rehash anything from the past. It is not productive to do so. He's been suspended. He served his time. It gets completed by tomorrow. Then he will be re-introduced obviously with you guys [the media] and our personnel."

Cashman said despite the past differences, he believes that Rodriguez will take a lot of pride in his comeback attempt.

"One thing about Alex, he has always been a hard worker," Cashman said. "It is nothing you ever have to worry about with Alex."

Cashman said Rodriguez said he was doing two-a-days at UCLA and in Miami.

"He looks forward to re-introducing himself to us in a positive way," Cashman said.

The Yankees will be without Jeter, their captain, and will have to find new leaders, which resulted in a reporter asking manager Joe Girardi if A-Rod could fill that void.

"Alex, at heart, is a teacher," Girardi said. "He likes to teach the game and where you're supposed to be and how to play a position. He likes to talk about hitting. Alex loves to talk about the game, but I don't necessarily think that he would seek that."