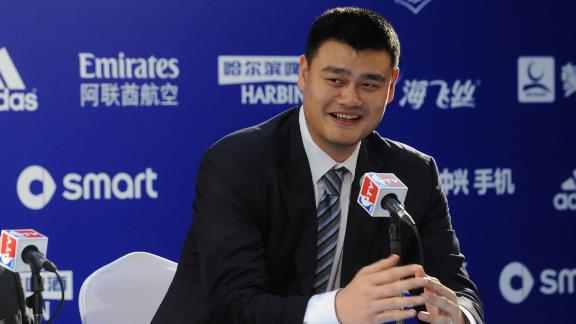 Former Houston Rockets center Yao Ming has been elected to the Naismith Memorial Basketball Hall of Fame, according to ESPN's Calvin Watkins and multiple reports.

The 7-foot-6 Yao, whose career started in Shanghai in the Chinese Basketball Association, was the first pick in the 2002 draft and is given much of the credit for bringing the NBA to China.

He was the league's first Chinese star, and NBA merchandise sales and television ratings in China mushroomed during his career. In 2007, a game his Rockets played against the Milwaukee Bucks, featuring Yi Jianlian, was broadcast on 19 networks in China and watched by more than 200 million people in the country, making it one of the most-watched NBA games in history.

Yao, 35, was an eight-time NBA All-Star selection, averaging 19 points, 9.2 rebounds and 1.9 blocks per game in eight seasons. He retired in 2011 following a series of foot and ankle injuries.

An enormously likable and playful personality, Yao was featured in several memorable television ads that played off his imposing size. At the time of his final season, he was the tallest active player in the NBA.

The announcement is expected to come at the NCAA Final Four in Houston this weekend. Yao will not be in Houston for the official announcement, sources tell Watkins.