Yasiel Puig won't be traded to unknown team that claimed him 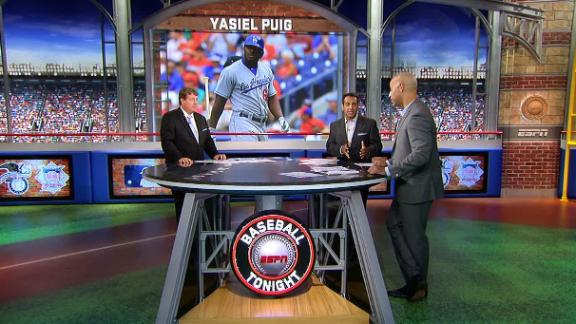 The unknown team that claimed Los Angeles Dodgers outfielder Yasiel Puig on revocable waivers had more interest in blocking him from going to another team than sincere interest in trading for him, a league source told ESPN's Jim Bowden.

Puig, 25, was demoted to the minors earlier this month a day after the Dodgers couldn't move him before the non-waiver trade deadline.

He told ESPN's Marly Rivera on Monday that he would have preferred a trade to another team instead of being demoted to the minors, but he also acknowledged he has learned some humility since joining the Dodgers' Triple-A team in Oklahoma City.

"The moment I arrived in L.A., people were crazy for me -- 50-60 thousand people [cheering] at the stadium," Puig said in the interview with Rivera. "I got used to that amount of fans. Getting to Triple-A and not seeing as many fans is not very appealing or fun to play baseball, but this is what I have to do for my future."

Dodgers GM Andrew Friedman said Tuesday that he had seen a similar change in Puig's focus and attitude since he was sent to the minors, and that the team was still deciding whether to keep Puig in Oklahoma City for the entirety of the AAA playoffs.

Puig has been physically limited and largely inconsistent even when healthy this season, batting .260 with seven homers in 81 games. His on-base-plus-slugging percentage is down to a career-worst .706.
Related topics:
sportsespnmlblos angeles dodgersyasiel puig
Copyright © 2021 ESPN Internet Ventures. All rights reserved.
More Videos
From CNN Newsource affiliates
TOP STORIES