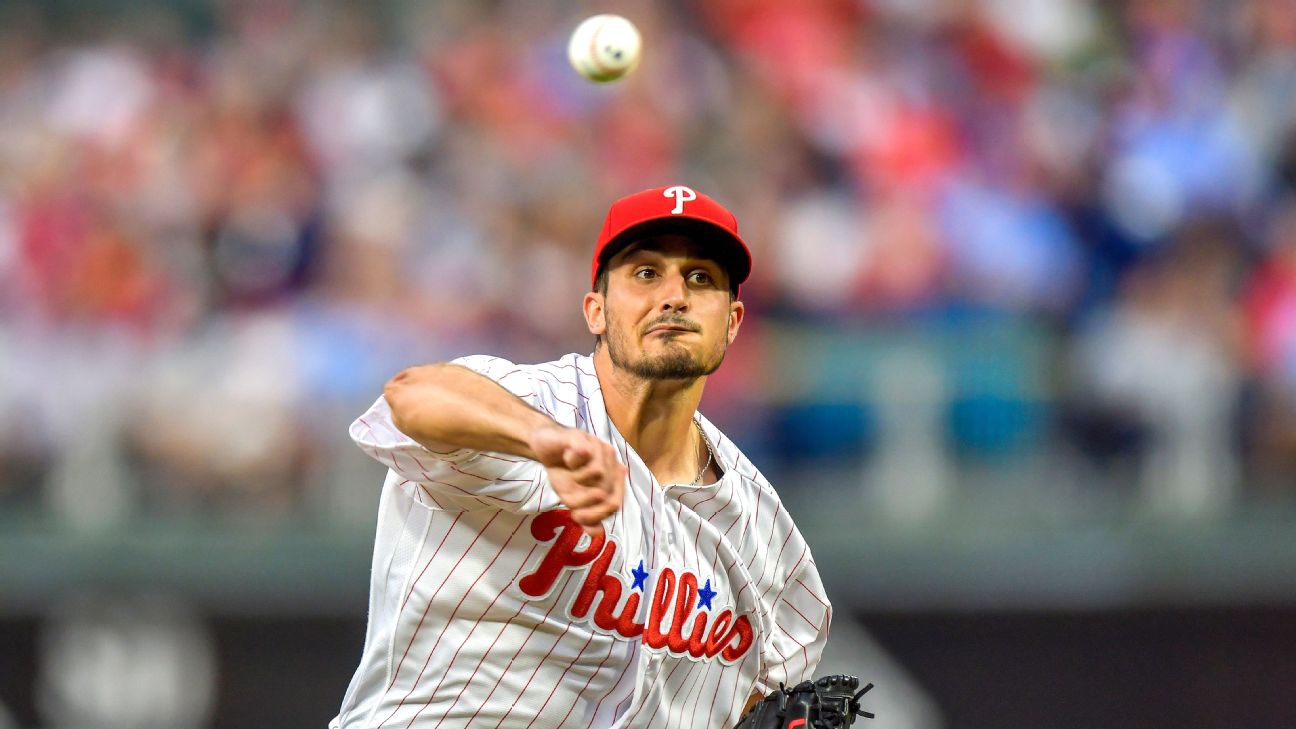 Zach Eflin appears to be making the leap from roster filler to impact starting pitcher. This is not something anyone would have predicted in spring training, but it's also something that maybe could have been predicted if you knew Eflin's history.

The third-year right-hander for thePhiladelphia Philliesbaffled theNew York Yankeeson Wednesday with seven scoreless innings, giving up only four hits and only one runner to reach second base as the Phillies won 3-0. He improved to 6-2 with a 3.02 ERA in 10 starts, mixed in four quality pitches and hit his spots while changing eye levels with his fastball. His 92nd and final pitch of the game was a 95 mph four-seamer.

Is this the same guy who posted a 5.85 ERA in 22 starts over his first two seasons? No, it's a better and apparently healthier Eflin. His strikeout rate those first two seasons was a pedestrian 10.4 percent. He fanned just 66 batters in 127 innings. You can't survive like that in the majors in this era. Out of 256 pitchers with at least 120 innings over those two seasons, he ranked 254th in strikeout rate.

In 2018, out of 139 pitchers with at least 50 innings, he ranks 39th in strikeout rate. That's a good reason to buy into what he's doing. It's no coincidence that his average fastball velocity has increased from 92.6 mph last year to 94.6.

Let's back up. Quick bio on Eflin: TheSan Diego Padresselected him 33rd overall in the 2012 draft and then included him in the disastrous trade that sent Yasmani Grandal to theLos Angeles Dodgersfor Matt Kemp. The next day, the Dodgers shipped Eflin to the Phillies for Jimmy Rollins. To be fair, his minor league strikeout rates weren't great. But he threw strikes and reached the majors in 2016 at just 22 years old. He missed most of the final two months of that season because of knee problems.

Apparently, Eflin had suffered from knee pain since he was 11 or 12. "I've gotten treatment my whole career," he said in 2016 when he went on the DL. "And it's getting to be a little much right now. I woke up this morning and they were pretty stiff and sore."

He had surgery after 2016 to repair the patella tendon in both knees. He was back in the rotation in April but not at full strength. He later missed some time because of a shoulder injury. He added some weight in the offseason, got stronger and is now throwing harder and proving he can pitch in the majors.

The Phillies have an ace in Aaron Nola. Eflin looks good. Nick Pivetta continues to progress and has 101 strikeouts in 84 innings and a 3.21 FIP. Jake Arrieta looks like the team's No. 4 starter right now. Jerad Eickhoff has had a setback, but the Phillies hope to get him back in the second half.

That's a playoff-caliber rotation. Indeed, the Phillies began the day ranked fourth in FanGraphs WAR (wins above replacement) for starting pitchers. Everybody wanted them to sign Lance Lynn or Alex Cobb (along with Arrieta). GM Matt Klentak wanted to give the young pitchers another chance to prove themselves. He made the right call.

The Angels are in trouble: Bad day for the Angels. First, they announced Zack Cozart will undergo surgery for a torn labrum in his left shoulder. Then they fell behind 6-0 to the Red Sox at Fenway, rallied to tie it 6-6, but ended up losing 9-6. Late in the game, pitcher Jake Jewell, just up from Triple-A and pitching in his third big league game, seriously injured an ankle covering home plate on a wild pitch and was carted off the field.

The A's have passed the Angels in the standings, as the Angels have dropped nine games behind the Mariners in the wild-card standings. Given the uncertainty of Shohei Ohtani returning, especially to the mound, it's getting harder to envision a path where the Angels turn things around. Ian Kinsler, Albert Pujols, Luis Valbuena and Kole Calhoun are all regulars with sub-.300 OBPs, and catcher Martin Maldonado is barely above that at .301. The depth isn't there to fill in for Cozart or try better alternates for the struggling regulars.

After one more game in Boston and three games in Baltimore, the Angels' next 15 games are against the Mariners (six), Dodgers (six) and Astros (three). Where are they going to be after those 15 games?

Oh, as a side note: J.D. Martinez became the first Red Sox player with 25 home runs before the end of June:

No stopping the Astros: The Astros trailed the Blue Jays 5-0 after the first inning. They were down 6-4 in the bottom of eighth when Marwin Gonzalez homered to cut the deficit to one. Then in the ninth, Alex Bregman stepped in against Ryan Tepera -- his offseason workout buddy -- with a runner on and did this:

"That was the first guy I've swung and missed two straight fastballs on this year, I think, besides [Luis] Severino," Bregman said. "So it kind of ticked me off."

Indeed, Tepera threw a third straight fastball and Bregman didn't miss, homering for the third straight game. He's up to .277/.379/.508 with 14 home runs and 49 RBIs as he makes a strong All-Star bid. It's a bit of a down year at third base in the American League with Josh Donaldson injured and Adrian Beltre having missed time, so Bregman or doubles machine Eduardo Escobar look like the backup options to Jose Ramirez.

Catch of the day: Earlier in the day, the Tigers fired pitching coach Chris Bosio for an insensitive comment made to a team employee. During the team's 3-0 lossto the A's, center fielder Leonys Martin made a spectacular catch as he crashed into the fence:

(Martin, by the way, could be a nice pickup for a team that needs a center fielder. I'm thinking of you, Cleveland.)

"I'm very happy to be part of this country," Martin said Monday. "Being able to vote and be part of the United States means a lot for me and my family."