Zach LaVine takes self over LeBron 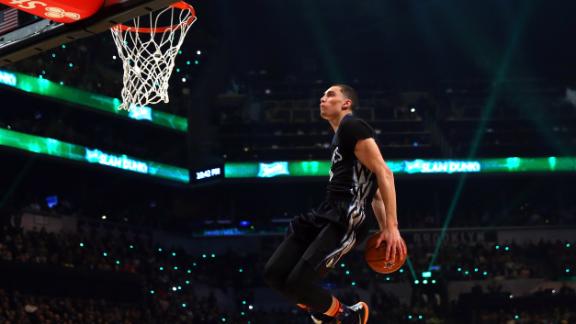 ESPN
Zach LaVine is the NBA's new dunk king, but how would he stack up against King James?

In an interview with "SportsCenter" after his All-Star Saturday night dunk competition win, LaVine said he'd take himself in a one-on-one dunk-off with LeBron James.

"I never go against my own talent so I've got to say me," LaVine said.

The 19-year-old rookie gave James, a four-time MVP and two-time champion, his due, but still predicted a win in the hypothetical dunk contest.

"I know LeBron's got some stuff that he ain't showed the world, either," LaVine said. "LeBron's one of the most freaky athletes of all time ... But like I said, I'm a confident person."

LaVine Says He'd Top LeBron In Dunk-Off
When asked who would win a dunk contest between himself and LeBron James, Zach LaVine picked himself.

LaVine The Slam Dunk Champ
SportsCenter Highlight of the Night: Zach LaVine put on a show in Brooklyn on Saturday night, winning the slam dunk contest over Victor Oladipo.

LaVine: 'I Just Wanted To Try Something Different'
Zach LaVine comments on his victory in the dunk contest and if he has anything up his sleeve for next year's competition.