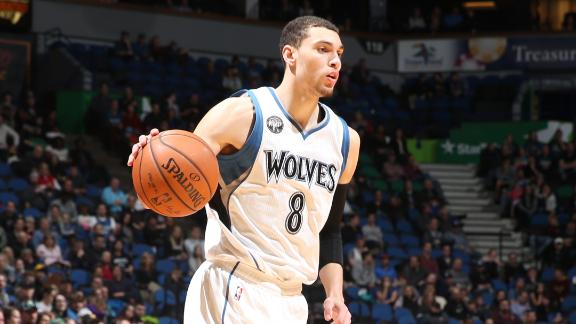 ESPN
ST. PAUL, Minn. -- The claps and cheers as Zach LaVine walked into the room were loud, audible to everyone in the school as the Minnesota Timberwolves guard arrived and waved to the crowd.

Audible to everyone, except for most doing the cheering.

In his short time in Minnesota, the 21-year-old has formed a fast bond with the Metro Deaf School in St. Paul, a school that caters to about 100 students who are hearing impaired. He has used his incredible leaping ability to win two slam dunk titles and make a name for himself as a rising star in the NBA.

His hops are also helping the kids at Metro Deaf get a better meal at lunchtime.

LaVine was on hand Monday for a ribbon-cutting ceremony on the school's new kitchen, which was paid for in part by the money LaVine won after beating Orlando's Aaron Gordon in an epic slam dunk contest at All-Star weekend last month.

"The biggest part for me growing up was interacting with kids during lunch time and recess," LaVine said. "They get all their meals catered in. I just thought it would be cool for them to be able to socialize and be able to hang out with each other, eat food together, instead of having to sit in class and eat and regular stuff."

LaVine first became interested in working with kids who were hearing impaired after he took sign language in high school. He did it with a buddy on a whim, preferring to go a different route than the standard Spanish classes many high school students take. Before long, he and his friend were using the language they learned to communicate during basketball games.

"Everyone thought we were doing dugout signs (like they use) in baseball," LaVine said. "We were doing a whole different language. It was really cool."

Looking for a way to get involved in the community in Minnesota, LaVine and Ashley Earle of BDA Sports scouted out potential fits for him. Earle found Metro Deaf School, and LaVine quickly endeared himself to the children, who were surprised to see an NBA player who could communicate with them via sign language.

"The kids were like, He knows how to sign!" said Susan Lane-Outlaw, the school's executive director. "That's the biggest thing. He knows American Sign Language. I think the kids connect with that. From there it just blossomed."

LaVine has visited to play games and basketball with the students and staff, spends time with them in the classroom and has even promised to put on a dunking exhibition of the kids reach certain goals in a reading initiative.

"I'm here. I can talk to them," LaVine said. "If they look up to me and I can make their day brighter, I'm all for it. I think it's really cool."

Estrella Rayner, a basketball-playing student from the Minneapolis suburb of Eagan, was asked to scout LaVine's sign language game.

"He's working on it," she signed. "I do play basketball, but to actually see a pro athlete that we can actually communicate with, it makes it all the better."

LaVine knows he's not as fluent as he was when he was practicing every day in class. But Lane-Outlaw said he can see improvements in his usage with each visit.

"Sometimes they lose me. But just seeing, oh wow he can do this, is kind of cool," LaVine said. "It would be like the same thing if I saw one of them come to a basketball court and dribble between their legs and shoot it, I would be like, whoa wait a minute, I can relate with this kid."