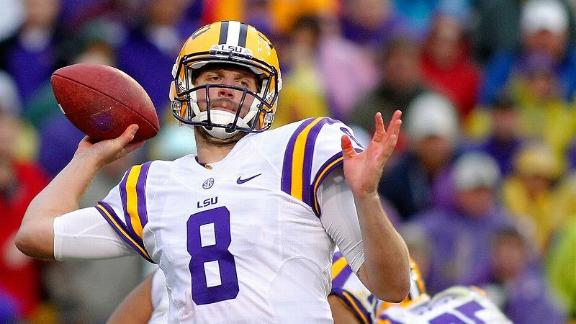 Mettenberger was sucker punched last weekend by an Alabama fan while at a bar with fellow rookie Taylor Lewan.

The former LSU quarterback says he answered "Good luck with that" before being slugged.

The man ran out of the bar before being chased down. A police report was not filed.

"It is never fun to get punched in the face, everybody knows that. But you have to take the high road in some situations,'' Mettenberger said.

"As much media attention as it got, it could have been a lot worse. It's something where you just live and learn, and put it in the past."

The rookie spoke about the incident for the first time Saturday after Tennessee's opening training camp session. He says he took the high road to avoid distractions for the Titans.

The one drawback to the incident, though, is that he keeps hearing "Roll Tide" from teammates.

"I get Roll-Tided a lot,'' Mettenberger said Saturday.

NFL Nation Buzz: Titans
Titans reporter Paul Kuharsky says QB Zach Mettenberger should succeed in the preseason because he'll be facing players who won't be starters or even on rosters when the season begins.