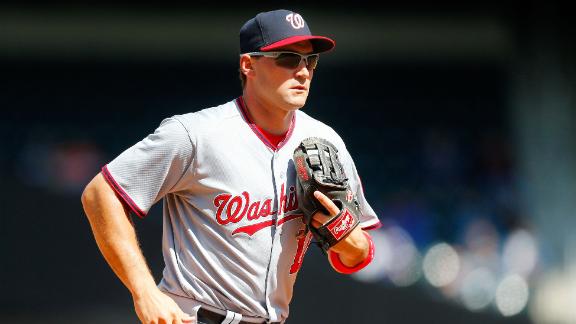 Washington Nationals star third baseman Ryan Zimmerman may spend more time at first base due to a right shoulder injury that has impacted the former All-Star's throwing ability.

Nationals manager Matt Williams said during a radio interview that Zimmerman, Washington's primary third baseman for the last eight years, is dealing with an arthritic shoulder.

"We have to look at Ryan, though, and say, 'Would I like Ryan to play third? Yeah, I would. For a long time? Yes,'" Williams said Monday night in an interview with 106.7 The Fan. "But the fact of the matter is, Ryan's got an arthritic shoulder.

"It gives him problems, and sometimes it's tough on him. So we've started to do some things at first base with him, where we can give him a break sometimes."

Zimmerman underwent an MRI on the shoulder, but no structural issues were detected. The 29-year-old has not played a game at first base in his nine-plus years with Washington, but Williams thinks Zimmerman can make the transition.

"He enjoys playing first," Williams said. "We did a little bit at spring training, worked hard at the position, and he enjoys it over there.

"So it gives us options, it gives him an option to go play first when his shoulder's bothering him. ... So, do I see him moving to first? Yeah, from time to time. But I would like him to be our third baseman for a long time. We have to take into account his shoulder, too. And that's a concern. It's a concern of his; it's a concern of everybody else."

Zimmerman has already made two throwing errors this season, including a two-out misfire Saturday night that led to a pair of unearned runs in a 6-2 loss to the Atlanta Braves.

"Through spring and last year and things like that, it felt good sometimes, it felt bad sometimes," Zimmerman said Sunday. "But it's never really felt like this."

Zimmerman's shoulder has been bothering him for two years. He committed 12 throwing errors in 2012 and, after offseason shoulder surgery, committed 16 last year.

SweetSpot TV: Zimmerman Gets MRI
Eric Karabell and David Schoenfield discuss the results of Ryan Zimmerman's MRI on his shoulder.