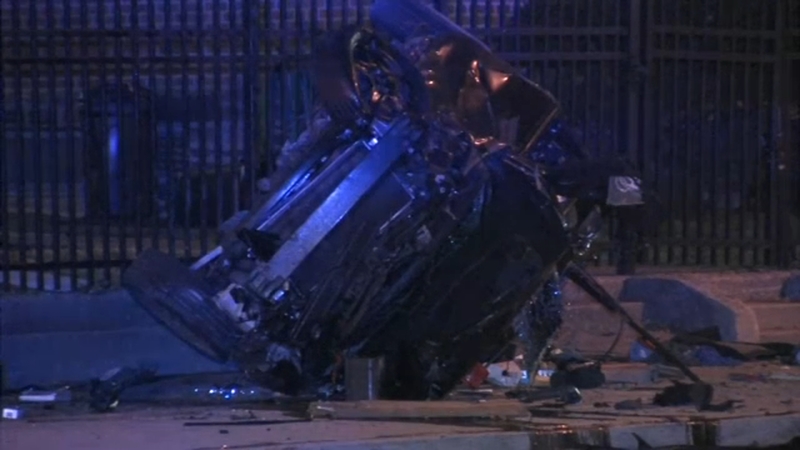 PHILADELPHIA (WPVI) -- Philadelphia police have charged a driver and identified the two individuals who were killed after a violent crash in the city's Mayfair section early Sunday.

Investigators say 27-year-old Nehamiah Carstarphen was behind the wheel of a Chevy Malibu when he drove around two vehicles stopped at a red light, and then ran the red light, at the intersection of Cottman and Torresdale avenues around 2:43 a.m.

RAW VIDEO: The Action Cam was on the scene after a fatal crash on Cottman Avenue in the Mayfair section of Philadelphia on December 16, 2019.

His vehicle was then hit by a Nissan Maxima, which had the green light.

A passenger in the Maxima, Ciarra Parker, was pronounced dead at the scene. The driver of the Maxima and another passenger were rushed to the hospital with serious injuries.

Carstarphen survived the crash, but the passenger in the Malibu - his 18-year-old nephew, Rashaan Cole - was rushed to the hospital with several critical injuries and died a few hours later.

Neighbors say they heard the loud bang of a crash and awoke to find their power knocked out for a short period of time.

"It was just a loud boom like a transformer blowing. It was 2:36 a.m. The power went out at our place," said Len Gradel who lives nearby.

The intersection of Cottman and Torresdale avenues known to be dangerous.

5 of the 6 crash victims were ejected in this accident. PD says that points to people not wearing seatbelts & a high speed crash. @6abc pic.twitter.com/x4J209MYsW

Fred Lamberti has lived around the corner for 44 years.

"Even if there's no fatalities or injuries, there are still accidents all the time, right and left here," said Lamberti.

Police say five of the six people involved in the crash were ejected, which points to people not wearing seatbelts and the high speed of the crash.