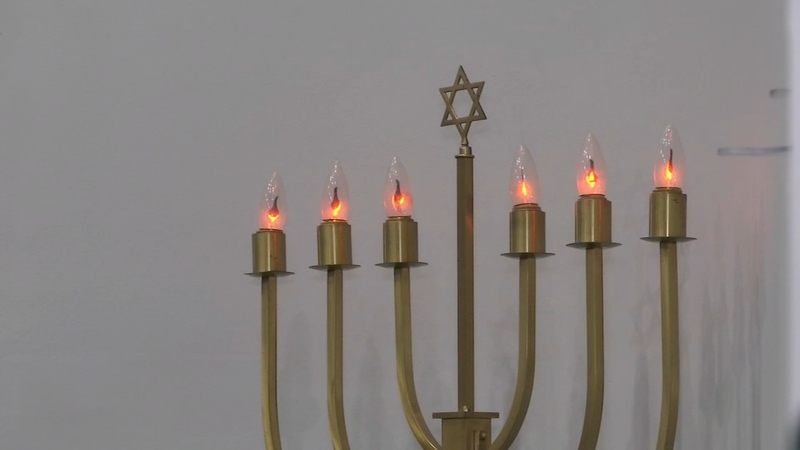 MARLTON, New Jersey (WPVI) -- Local leaders of South Jersey's Jewish community are reacting to a stabbing at a Hanukkah celebration outside New York City over the weekend.

Rabbi Nathan Weiner says many new security measures have been added to Congregation Beth Tikvah in Marlton, N.J. over the past several years. There's a panic button under the lectern and security cameras, to name a few. After this weekend, he says it's clear the measures are all too necessary.

"It's been a difficult week for the community in that it's Hanukkah, which prioritizes being visibly Jewish," said Weiner.

After five people were stabbed at a rabbi's home during a Hanukkah celebration in Monsey, N.Y. on Saturday, Rabbi Weiner says his synagogue will likely add one more precaution: locking the doors during services.

"You can't let go and be one with your community and try to cling to God in a space where you're feeling physically unsafe or emotionally unsafe," said Weiner.

In Cherry Hill, at the Katz JCC and Raab/Goodwin Holocaust Museum, were more feelings of heartbreak.

"Everybody is so concerned about our safety as Jewish people living in communities today," said Jennifer Dubrow Weiss, CEO of the Jewish Federation of Southern New Jersey.

She says her organization is fighting back against anti-semitism with educational programming, safety trainings, and working with law enforcement.

"These things build community and by building community we will get stronger and we will have much more ability to stand up as one," said Dubrow Weiss.

Rabbi Weiner says while they will likely implement that new door locking policy soon, he wants to maintain an environment of inclusion at the synagogue.