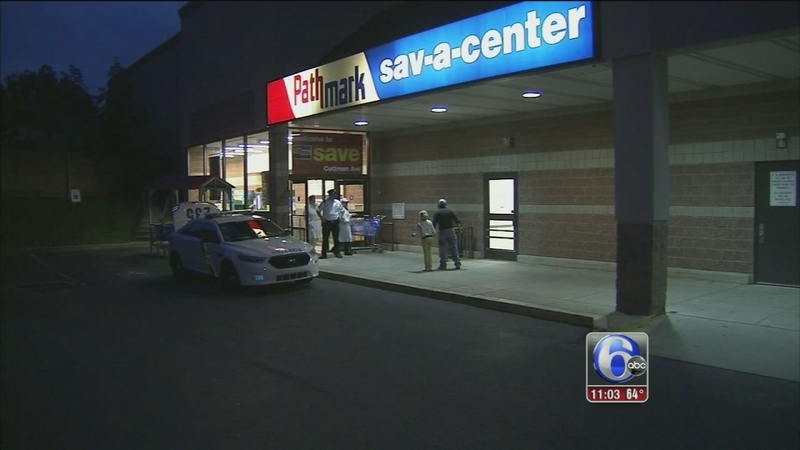 Authorities rushed to the grocery store on the 800 block of Cottman Avenue near Rising Sun just before 6:00 p.m. Tuesday.

Employees and shoppers watched a man stab another in the neck with a kitchen knife.

"One of the ladies was screaming. I think it was his wife or partner or girlfriend or something. It was nerve-racking," employee Gary Gelb said.

Investigators say the 50-year-old victim was arguing with the 40-year-old suspect in the produce section when that knife came out.

"It was scary. I've been with Pathmark for over 32 years and this is the first time I've ever seen something like this happen," Gelb said.

Police say it appears the victim knew his attacker, but, at this point, investigators don't know why they were arguing.

Officers say some teens tipped them off that the suspect was walking on nearby railroad tracks.

They located the man and took him into custody. Police also recovered the knife.

Officers say the victim was in the parking lot when they arrived, suffering from stab wounds to his neck and face.

"There is a trail of blood throughout several aisles because our victim did bleed heavily, so we had the store immediately closed and we are bringing out the Department of Public Health," Philadelphia Police Chief Inspector Scott Small said.

He was taken to Temple University Hospital in critical but stable condition.

Meanwhile, investigators were pulling surveillance video of the brutal attack.

Police say there were about 100 employees and customers in this store, so they have a lot of witness statements.

The suspect was taken to Northeast Detectives for questioning. He's been charged with aggravated assault and other offenses.

No names have been released.