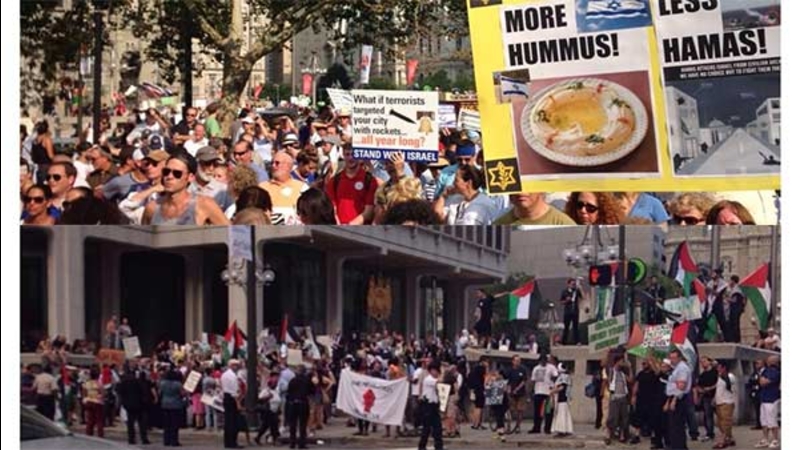 CENTER CITY (WPVI) -- Here in Philadelphia, as in many parts of the world, people are concerned about the escalating conflict in the Middle East. And there are strong opinions on both sides.

More than a thousand people, mostly of the Jewish faith, rallied at Love Park Wednesday evening for the Standing with Israel demonstration.

"We will not surrender. We will not give up. The Israeli people are resilient and strong," Elad Strohmayer, Israeli Deputy Consul General, said.

As the battle rages on in Gaza, so many spoke out against the deadly violence.

"This is not just a war against Israel. If you read Hamas' charter, it says, not only do they stand for the distraction of Israel, but they want to kill every single Jew around the world," Adam Rosen of Cherry Hill, New Jersey said.

"Hamas, all they want is blood and war and killing. Look at the cease fires, Israel obeys them. Hamas doesn't," Debbie Lev of Penn Valley, Pa. said.

While they supported Israeli security forces and condemned Hamas militants, a smaller group of more than 100 people was across 15th Street holding a pro-Palestine rally.

They stood with Gaza because officials there say the majority of the Palestinians killed in this latest conflict were civilians.

"This is not good enough. You should not be supporting an actual terrorist state. A state that is actually carrying out state terrorism," Aine Fox said.

In the end, after the Stand with Israel demonstration was over, police cleared Love Park concerned about rising tensions.

However, both groups, no matter what side of the street they were on, said they just want peace.

The Jewish Federation of Greater Philadelphia also used its rally to raise money for humanitarian needs in Israel.

Police say there were a couple of arrests and one person has already been released.