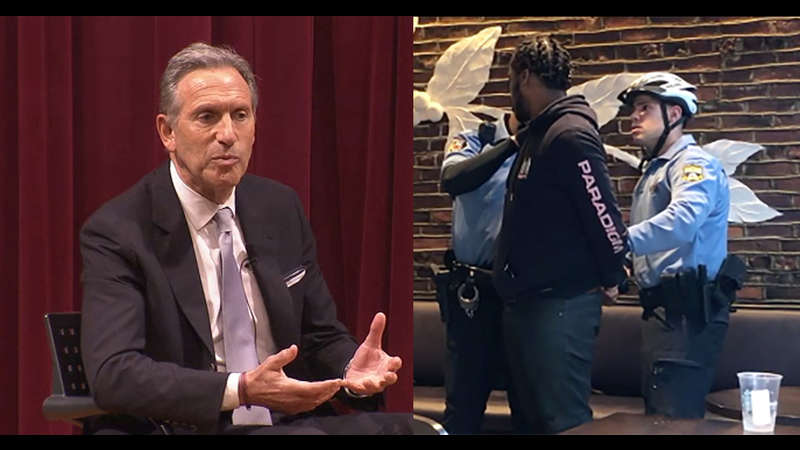 PHILADELPHIA -- Former Starbucks CEO Howard Schultz acknowledged the manager of one of the company's shops in Philadelphia where two black men were arrested last year might not have called authorities if the two men had been white.

The acknowledgement came Wednesday night at an event in Philadelphia where Schultz was confronted by the person who first shared the video of two black men getting arrested at the shop.

Speaking during a stop on his book tour, Schultz - who is considering a possible 2020 presidential bid - told the audience the Starbucks manager contacted police after she "felt a threat."

But Melissa DePino, who first posted the video of the men being handcuffed and led out of the store by police, identified herself to Schultz at the event and told him he wasn't describing accurately describing what had happened.

I’m here at the @HowardSchultz event in Philly. Wrote a question on a card identifying myself as the woman responsible for the viral video. What are the chances they’ll pick it?

Well they don’t need to pick my question because I just stood up in the middle of the event and called @HowardSchultz out on his lie about the incident in Philly.

He reiterated that he “doesn’t see color” and says his comment was misinterpreted.

"You are not describing the incident accurately and the way you are describing it is perpetuating the problem," she said. "And I know you want to be part of the solution and I hope you will be, but when you say there were words between the two of them, and she felt threatened, that didn't happen. I saw it with my own two eyes. I was there."

Schultz responded to DePino that he had "great respect" for what she saw and described how he handled the situation after having a private conversation with the manager.

"I was advised before a nationally televised interview with Gayle King not to say something that I knew was not true. And what was true was I spent time with the manager one-on-one and I just asked her a simple question, and I asked her, 'If those two young men were white, would she have called the police?' And to her credit, she said, 'Probably not.' So once I heard that, I knew that what occurred was a form of racial profiling."

Schultz said he was advised to not make those comments about possible racial profiling on national TV immediately after the incident, out of fear it would damage the company and the brand. He said he felt a "moral obligation" to say the truth, however.

Rashon Nelson and Donte Robinson were arrested within minutes after the manager called police to report that two men were refusing to either make a purchase or leave the premises. They were led off in handcuffs but later released without charges.

Both men appeared on Good Morning America last May to discuss the events that happened that day.
EMBED More News Videos

Video of the arrest prompted a national outcry and led the current CEO of Starbucks to personally apologize to the men. The company also changed store policies, closed shops across the country one afternoon for racial-bias training and reached a settlement with the two men for an undisclosed sum.