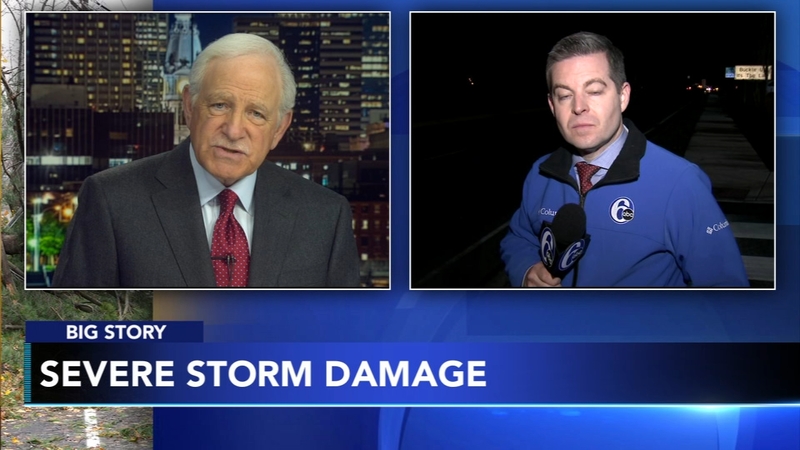 WARMINSTER, Pennsylvania (WPVI) -- Straight-line winds caused damage in Warminster and Warrington, with estimated wind gusts of 110 mph, according to the National Weather Service.

On Friday afternoon, PECO posted time estimates for restoration for a busy stretch of Street Road. Officials said it could be Sunday night before power is back on where multiple utility lines were downed in the Halloween storm.

"It was crazy," said Jill Gallagher of Hatboro, Pennsylvania. "Sounded like a freight train coming through."

A normally-busy stretch of Street Road remains closed between York Road and Norristown Road. Power is knocked out and drivers say traffic is a mess.

"Very frustrating. Traffic around the area is really bad. It's bumper to bumper," said Aron Cutler of Warrington, Pennsylvania.

Folks trying to pick up groceries or take their dog to the vet here at the Warminster Town Center had to find somewhere else to go. Most of the shopping center was in the dark.


Elsewhere in Bucks County, a 60-foot pine tree came down during the storm, crashing into a home on Taylorsville Road in Washington Crossing.

While many are waiting for the lights to come on, some are looking on the bright side.

"Things happen. At least nobody got hurt," said Jim Courchain of Warminster, Pennsylvania.

Warminster Township officials are now asking people to avoid the area of major road closures, and that includes cutting through the shopping centers, to cut down on the congestion.

Megan Morace said she and her husband were watching Action News as the storm moved closer to their home.

"Cecily was talking about the storms and just like that Cecily disappeared," said Morace. That was the moment the power went out in the Morace home Halloween night.

Morace said her family spent time in the basement during the tornado warning.