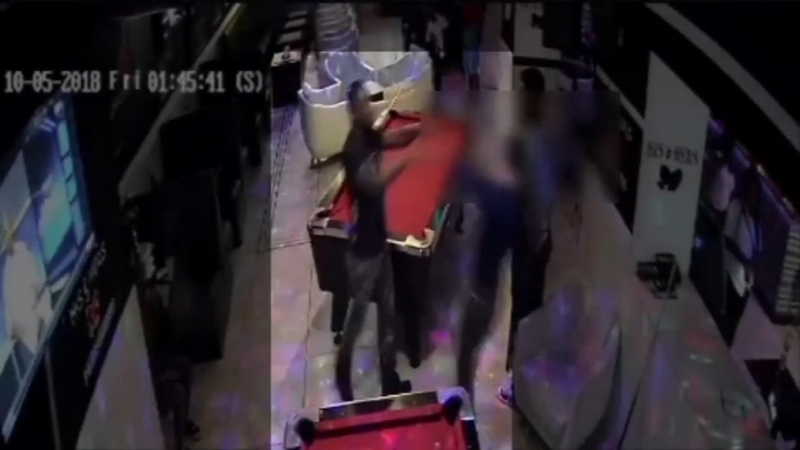 QUEEN VILLAGE (WPVI) -- Philadelphia police have released surveillance video in hopes of identifying a suspect wanted in the violent beating of a man at a restaurant on South Street.

The incident took place at approximately 1:50 a.m. on October 5th inside His and Hers Restaurant and Bar, located on the 200 block of South Street.

Surveillance video from inside the restaurant shows the suspect and victim arguing over a game of pool, during which the suspect knocked the victim to the ground and punched him several times.

Police say the suspect was then escorted outside where he waited for the victim.

Suspect sought by police in connection to South Street assault. Watch the video from 6abc.com on October 24, 2018.

Video from outside the establishment shows that when the victim exited, the suspect punched the victim, knocking him unconscious.

"It is really disturbing to watch," said Philadelphia Police Captain Sekou Kinebrew. "I mean you see someone that seemed to be unprepared for the punch, get knocked out."

Investigators are confident that if someone knows the suspect they will be able to recognize him.

Officers say the victim and employees at the bar are helping with the case.

"The victim is cooperating with investigators and it doesn't appear they knew each other prior to this, otherwise we'd have a name, a nickname or something," Kinebrew said. "But it happens all the time, pool tables, it's like a pick-up game on the basketball court - it's just whoever shows up."

We showed the surveillance to those who are familiar with the area and the establishment. Many say hearing about violence at any bar at 2 a.m. is not a surprise.

"Through the years there have been a few instances where they have had trouble after hours," said Old City resident Michael Waxman. "A number of years ago there was a shooting out here, but as of late I haven't heard of any problems or anything. I think they probably work hard to keep things under control."

Cameras didn't capture the audio from the confrontation, but clearly shows the violent encounter.

Police say the suspect is facing aggravated assault charges which is a felony.