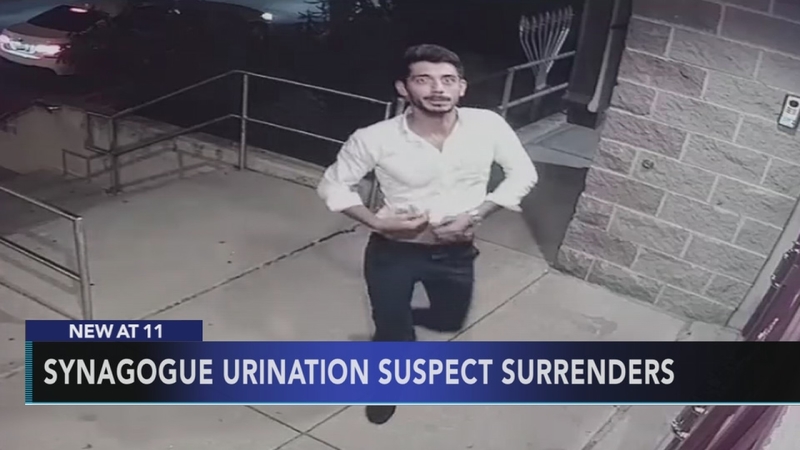 NORTHEAST PHILADELPHIA (WPVI) -- A man caught on video urinating on a synagogue in Northeast Philadelphia has turned himself into police, Action News has learned.

His name has not been released at this time.

Suspect sought for urinating on synagogue in Northeast Philadelphia. Bob Brooks reports during Action News at 5 p.m. on August 14, 2017.

The incident happened at 12:30 a.m. Sunday at the Congregation Beth Solomon, located at 198 Tomlinson Road.
Surveillance cameras captured the man as he approached the front doors, gave an obscene hand gesture in the direction of the camera, then began to urinate on the walls and sidewalk directly in front of the doors of the synagogue.

The man then entered the passenger seat of a white four door sedan and left the area.

Philadelphia Police Lt. Dennis Rosenbaum says this is something the department isn't going to stand for. They believe this was an anti-Semitic attack.

"We believe the synagogue was targeted," Rosenbaum said.

The congregation has fallen victim to several attacks lately.

Their cameras have been shot out with paintballs, their camera feeds have been cut, and their menorah has been stolen.