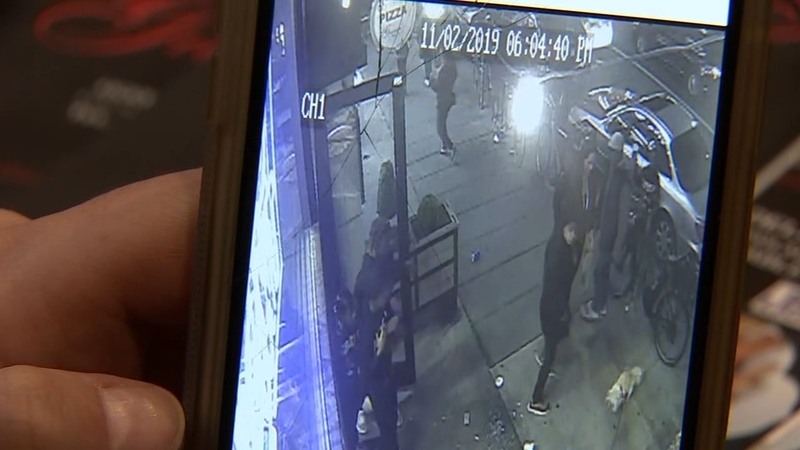 PHILADELPHIA (WPVI) -- More cases of teens behaving badly on Chestnut Street in Center City have surfaced causing some business owners to think a nearby school should be relocated.

Giovanni's Bar and Grille, located near 16th and Chestnut, captured video of a teen kicking one of their customer's dogs then stealing the customer's food on November 2 around 6 p.m.

It was a Saturday night, but restaurant owners recognize the kids from during the week and believe they attend one of the area schools.

On Wednesday, a group of teens from Philadelphia Electrical and Technology Charter School brutally beat a driver who ran after them after a teen vandalized his car while at a stoplight at 15th and Chestnut. This happened at 1:30 p.m., in broad daylight.

On Thursday, witnesses said kids threw fire extinguishers into a building on the 1100 block of Chestnut Street that shares an entrance with PetSmart. The fumes from the foam of the extinguishers became overwhelming causing the pets in doggy day care to be evacuated.

The owner of Giovanni's says the students during the week are now returning on the weekends causing the same chaos they are trying to avoid.

She believes if Philadelphia E&T, located in the 1400 block of Chestnut Street, would relocate or if police would offer more resources, the problems around 15th and Chestnut would stop.

"Either to have police stationed outside until all the businesses on the block closed or to see what the city can do about relocating the school," she said.

"Our school community, including our Board of Trustees, Administration, Faculty, Staff and the Students, is saddened and angered by the incident of violence that took place this week at 15 and Chestnut. We are cooperating with the Philadelphia Police Department and currently investigating the matter. We will pursue disciplinary consequences for all students involved in illegal activity or activity that is in violation of our school's Code of Conduct.

As part of our ordinary practices, we communicate with our students, their families, our local community, and the Philadelphia Police Department to try to ensure that students do not engage in conduct that is illegal or inappropriate. Each day we have at least ten staff members circulating and posting in the areas surrounding our school, including on the streets and nearby corners, and along the routes to the major SEPTA points. We are proud that our Climate Team has a presence in this community. As a result of that presence, our Team was able to intervene with this week's incident to aid with this situation. We will continue to be visible at this area at our dismissal time to help with the large number of people at this intersection, and to support police efforts.

Philadelphia E&T has been located at 1420-22 Chestnut Street for eighteen years, and has graduated hundreds of successful students, many of whom are also upset with the negative reflection this incident has had on our school community.

We are also aware of concerns that have been raised that 15th and Chestnut and the surrounding area has become a gathering point for large numbers of teenagers in the after-school hours, from many schools throughout Philadelphia including Philadelphia E&T. We have been working with the Philadelphia Police Department and School District of Philadelphia to alter dismissal strategies and develop other options to ensure everyone's safety in the after school hours. Our school leadership is always willing to cooperate with local businesses and law enforcement. We encourage the local community to communicate with school officials and Philadelphia Police regarding their frustrations and not to communicate with groups of students."

Group of teens wanted in 3 incidents: as seen on Action News at Noon on November 22, 2019.