Teens stabbed while on their way to school in North Philadelphia 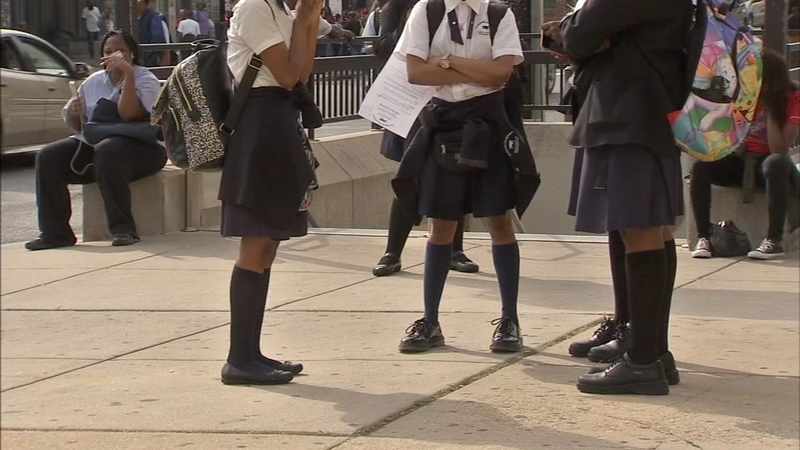 PHILADELPHIA (WPVI) -- Police said a fistfight between two girls this morning on the corner of Broad and Allegheny streets got out of hand when two boys who intervened wound up stabbed.

Philadelphia police said the two boys, 15 and 16, were stabbed by an unidentified man in a passing car who might have misunderstood the situation, believing that the boys were attacking the girls.

"He was trying to protect them," said student Angel Foreman. "The boys were really trying to get them to stop fighting so the man I guess stabbed them."

It happened around 7:15 a.m. Thursday morning as the boys were on their way to Randolph Technical High School on Henry Avenue.

Teens stabbed while on their way to school in North Philadelphia. Maggie Kent reports during Action News at 12 p.m. on October 4, 2018.

Both were taken to Temple University Hospital for treatment. The 15-year-old boy suffered stab wounds to his left arm and his leg. He is in stable condition. The 16 year old is in critical condition after being stabbed in the stomach.

"Thank God both kids are on the road to recovery," said School District of Philadelphia Spokesperson Lee Whack.

The school district says students at Randolph Technical High who are upset or may have witnessed this are being offered help.

"Counseling services are available at the school, and I know that that is been taken care of and that students are taking advantage of the services," said Whack.

School officials are sending out a letter this afternoon to notify parents about the incident.

Police say they are looking for the attacker. They are hoping surveillance video will help them to develop adescription of the suspect and the vehicle.
------
Send a News Tip to Action News
Learn More About 6abc Apps
Report a correction or typo
Related topics:
philly newsschoolteenagersstabbing
Copyright © 2021 WPVI-TV. All Rights Reserved.
More Videos
From CNN Newsource affiliates
TOP STORIES