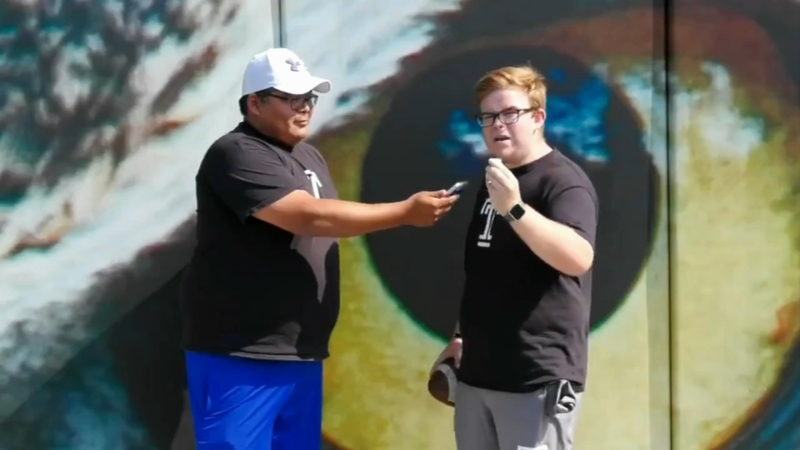 PHILADELPHIA (WPVI) -- At the end of Temple University football practice, cameras, microphones and reporters all gather around Scott Hayward.

He's not the star quarterback, but he is now a star thanks to a viral Twitter video.

Hayward, a member of the Owls video department, challenged ESPN analyst and former NFL punter Pat McAfee to a punt-off before the game against East Carolina. He did it while mimicking Randy "Macho Man" Savage's raspy voice.

"Anytime you're ready Pat, I'm challenging you to a punt-off. Mano y mano, brother. Let's go for it brother," he said.

The video ended with Hayward kicking a football so hard, it explodes.

McAfee heard about the video. He declined the challenge but told Hayward if he could punt a ball 30 yards, he would donate $10,000 to a charity of his choice. "Macho" Scotty Smalls delivered.

McAfee was stunned. Hawyard was not. He looked right into the camera and said, "pressure makes diamonds. Diamonds last forever. Lock in!"

He admitted that it was lucky the ball went that far considering that was his first attempt of the day.

The punt netted the Philadelphia Boys and Girls Club a $10,000 donation, and one from Temple Head coach Rod Carey too.