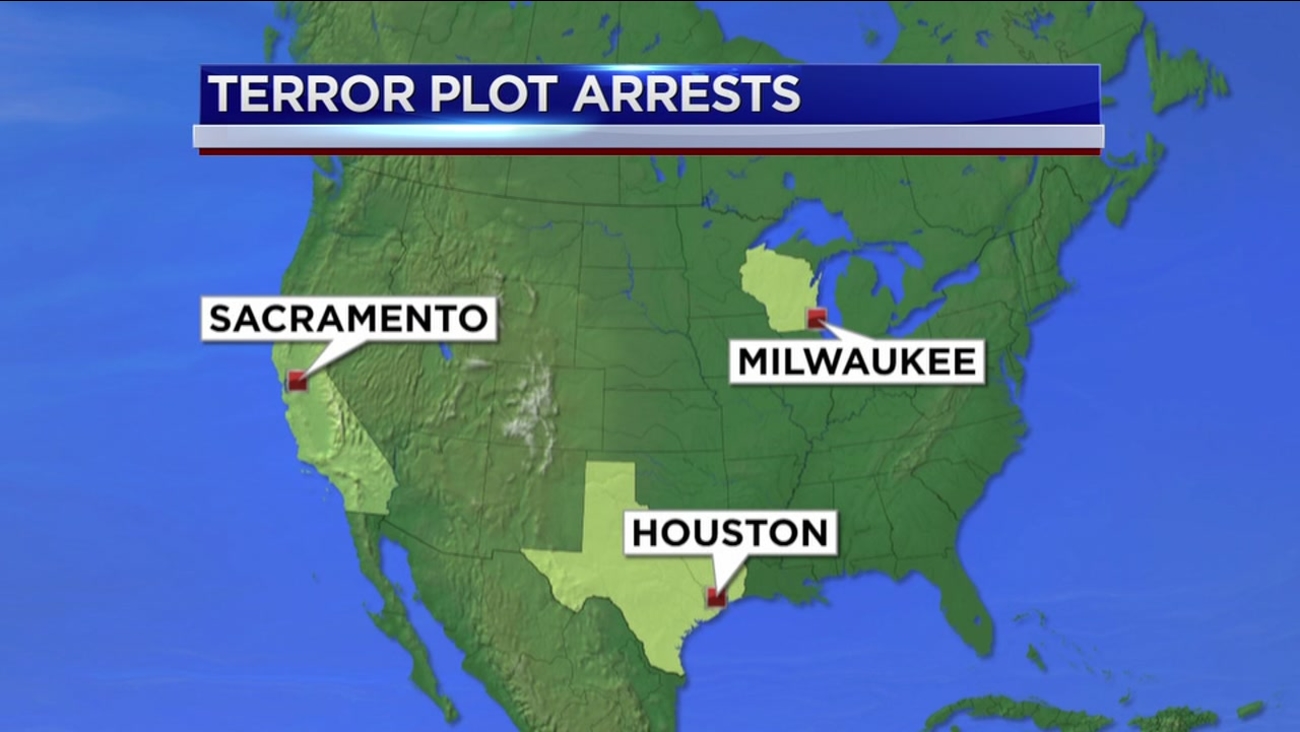 A suspect was arrested in Houston Thursday. Arrests were also made in Sacramento and Milwaukee. (KTRK)

SACRAMENTO, Calif. -- Authorities said Thursday that two people have been arrested on terrorism-related charges in California and Texas, including a refugee from Iraq who is charged with lying to federal investigators about his travels to Syria.

A criminal complaint unsealed Thursday accuses Aws Mohammed Younis Al-Jayab, 23, of traveling to Syria to fight alongside terrorist organizations and lying to investigators about it.

The complaint said Al-Jayab, a Palestinian born in Iraq who came to the United States as an Iraqi refugee in October 2012, communicated on social media about his intent to return to Syria to fight for terrorist organizations, discussing his previous experience fighting against the regime in Syria. When he was interviewed by citizenship officials, he lied about his travels and ties, the complaint alleges.

Ben Galloway of the federal defender's office is the suspect's attorney. He did not immediately return telephone and emailed messages Thursday.

The U.S. Attorney's Office in Sacramento said Al-Jayab was arrested Thursday morning in Sacramento. Meanwhile, the governor and lieutenant governor of Texas praised the arrest in Houston of what Lt. Gov. Dan Patrick called a terror suspect.

"Based on the facts, as we know them, today's action may have prevented a catastrophic terror related event in the making and saved countless lives," Patrick said in a statement.

"I applaud the thorough law enforcement investigation that resulted in this arrest," Patrick said. "Based on the facts, as we know them, today's action may have prevented a catastrophic terror related event in the making and saved countless lives.

"This is exactly what we have repeatedly told the Obama administration could happen and why we do not want refugees coming to Texas. There are serious questions about who these people really are, as evidenced by today's events."

"I applaud the FBI for today's arrest of this dangerous subject," Abbott said in a prepared statement. "However, this is precisely why I called for a halt to refugees entering the U.S. from countries substantially controlled by terrorists. I once again urge the President to halt the resettlement of these refugees in the United States until there is an effective vetting process that will ensure refugees do not compromise the safety of Americans and Texans."

Federal officials in Houston did not immediately provide more details.

Federal officials say a separate arrest in Milwaukee that grew out of the Sacramento investigation is not related to national security.