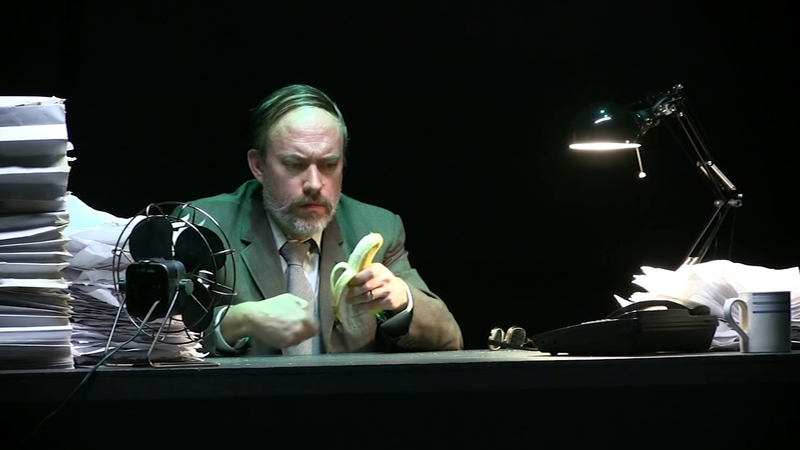 PHILADELPHIA (WPVI) -- You've heard of the movie, The Accountant. A locally produced play by the same name is debuting in Philadelphia as part of the annual Fringe Festival.

The Accountant, the play, is the work of Trey Lyford, a critically acclaimed local artist whose works are always a festival favorite.

The show focuses on a lonely middle aged office clerk reassessing his life, and Trey Lyford is both the creator and the star, "It is a piece that I kind of started making about this figure I saw at a temp job years and years ago in New York."

Lyford says he was moved to create the work after experiencing a string of recent losses, including the death of his mother, "My character doesn't speak," he says, and he set the show in a dark and eerie workplace, "The tedium of work kind of bores him into this state of euphoria where the world of his memories come alive."

A mix of illusion, origami and puppetry brings the set to life.

"On the surface, it's just a guy in a desk and an office," Lyford says, "then it goes into his mind and his imagination."

Set designer Eric Novak uses kinetic elements to animate the character's thoughts. In one scene, Lyford says, the office transforms into a snowy field, "like a giant beautiful kind of landscape of winter."

The music was arranged by Cole Green, best known for his work with Beyoncé.

"An amazing trumpet player and composer," Lyford says, "At one point I have him blowing air through his horn for like 3 minutes and he's in circular breath where he doesn't take a pause."

Lyford created an online component as well, inviting audience members to share their own feelings about life and loss, and he uses those responses to constantly update the show.

"It's not a piece where you sit back and kind of things happen at you," Lyford says, "I think people are really drawn forward in to the piece."

You can see The Accountant the play September 6-9 at Christ Church Neighborhood House, located at 20 North American Street in Philadelphia.

Tickets for the show can be purchased on the Fringe Arts website.