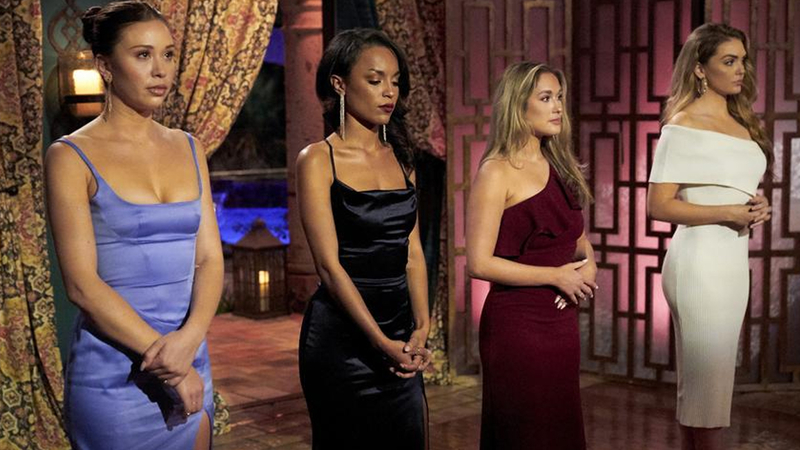 NEW YORK -- This week it was time for the long-awaited Hometown Dates on "The Bachelor!" Clayton said he hasn't told any of the women that he loves them yet, but he's hoping these dates give him clarity.

Clayton traveled to Virginia to meet Susie and her family. Susie said she wanted to know if Clayton "liked being choked." She was referencing Jiu Jitsu. Susie began training in Japan and continues to enjoy it. He learned a movie called "shrimping." Clayton joked that he couldn't escape shrimp after Shrimp Gate! Then, Susie took Clayton for a picnic by the water so she could share about her family. Susie told Clayton that when her father got sick it was heartbreaking to her to think of him not being there to walk her down the aisle when she gets married one day. Clayton said he hopes to live up to her expectations.

That evening, Clayton met Susie's mom, dad, sister, and best friend. They seemed extremely warm and welcoming! Susie's dad said that he had an MRI coming up but he expected good results. He assured Susie that he will be there for her wedding day. Her dad shared with Clayton how special Susie is and joked that he's shocked someone hasn't knabbed her yet. "You've got her on the line, all you have to do is reel her in," he said. Her dad also shared how Susie slept next to his bed and wouldn't leave his side when he had one of his roughest days of treatment. Susie's dad also said that if Susie trusts him then he does, too. Clayton admitted to her mother though that he was guarding his heart, but he will "get there" as far as being in love with her. She relayed to Susie that she's on the right track to be cautious because Clayton isn't in love with her just yet. "Proceed with caution," Susie's mom said.

Gabby's Hometown Date
Clayton moved on to Denver, Colorado to meet Gabby's family. She took him for a hike in the woods and she tested his knowledge on how to scare off bears. She took him to a place called "proposal rock" where she joked that he should have brought a ring. It was a scenic and romantic location where Clayton really seemed to enjoy his time with her. Then, they hiked over to a random hot tub in the woods. In true "Bachelor" fashion, they sipped champagne and talked about who he would be meeting. Gabby said that her father's girlfriend was recently diagnosed with cancer so they can't go see him due to COVID. He would be meeting her grandpa, aunt, uncle, and cousin. He was bummed but he obviously understood.

Gabby's family seemed really sweet. Clayton brought up their first interaction right out of the limo where she brought a pillow with his face on it and said she wanted to sit on his face. Her grandfather thought it was hilarious! He said, "Gabriella!" Then, he pulled Clayton aside to talk and find out more about him. Her grandfather said, "She's always been a dingbat!" as they talked about her humor. "You better be good to her," Gabby's grandpa said. He urged Clayton not to rush into anything and said he would tell Gabby the same thing. Gabby's aunt, uncle, and cousin were so nice and very supportive of her. They said they were glad that they hadn't rushed into saying "I love you" yet but they thought it was very positive to see Gabby being herself around Clayton.

There was a honk outside the house and Gabby ran outside, it was her dad! He brought some poster boards just like in "Love Actually." I'm not sure why Clayton didn't go outside to see the the whole thing, but they showed him standing by the door at the end of it. Clayton was really happy for her and once he drove away they did some kissing! Back in the house, everyone was so happy to see Gabby overjoyed and grandpa is just too cute. "Oh my baby!" he said as he gave Gabby a kiss goodbye. Clayton said that he could see himself being a part of Gabby's family. Outside, at the end of the date, Gabby told Clayton that she was falling in love with him. "There it is!" Clayton said. He added that he couldn't stop smiling.

Serene's Hometown Date
Clayton traveled to Oklahoma City to meet Serene's family. She asked him if he was afraid of heights and she pointed at an adventure course. They had to climb and do a really scary ropes course together. Clayton was really nervous and saying, "No, no, no," as he practically cried walking across part of the course. It was hilarious because Serene did that portion of the course no problem and he couldn't believe it.

Would your reaction be like Clayton's or Serene's? ⤵️ pic.twitter.com/7o5zdrC24c

He was clearly scared of heights and you had to give him credit for doing this date! The only way down was to jump to a mat 80-feet below. After freaking out for a bit, Clayton did it! Serene barely batted an eyelash as she jumped. They seemed to bond over the experience and Serene made sure to tell him that she was falling in love with him, again. She told Clayton that he would be meeting her mother, brother Roland, and best friend Melanie. Her dad would not be there because they divorced when she was 2.

That evening, Clayton met Serene's family who seemed to have their poker faces on. Her brother said he loves how happy and open she is to Clayton but he's also concerned because he knows his sister could get crushed in the end. Roland flat out asked Clayton, "Do you love her?" Clayton said, "I haven't told anyone that I love them, I'm not there yet." Roland did not seem to love that response. Her mom was concerned that Serene has expressed that she's falling in love. Serene also showed her mom the firefly jar that Clayton gave her and her mom also seemed to find that really touching. Her brother added that he's been on the phone with his sister crying until 3 a.m. over her heartbreaks and he cried as he told her he's worried. He's there to be fully supportive, but he's just worried. Her brother is so sweet! As Clayton said goodbye to Serene, she told Clayton that she was "in love" with him. Clayton again said, "I can't stop smiling now!"

Rachel's Hometown Date
Clayton's last stop was Florida for his Hometown Date with Rachel. She attempted to catch him, in hilarious fashion. They kissed as they talked about how much they missed each other. Poor Rachel, she was losing her voice! It got progressively worse as the date went on. They went on a clear bottom kayak ride. They had a great time and even jumped in the water to make out. Didn't they just say there could be alligators in there?! Rachel told Clayton that they would be meeting up with her mom, dad and best friends. She warned him that her dad was going to be very tough on him and that he's never liked anyone she has brought home to meet him. To soften the blow, Rachel reminded Clayton that she's falling in love with him.

Rachel's mom jumped up right away and squealed when they walked in the house, but Tony, Rachel's dad, was all business. Tony seemed disturbed by the whole story of how Rachel and Clayton's relationship has going. But then, he also wiped away tears! There's just a ton of love there. Rachel told her friends that Clayton has never given her a reason to doubt him. She's focusing on their relationship, but admitted she doesn't know if his relationships with the other women have progressed as far.

Tony, asked if he understands Rachel's dreams. Clayton said he would be willing to move for her so that she can achieve her piloting goals. The conversation went as well as it possibly could. He said he can't give Clayton his full blessing until he speaks to Rachel and if he gets it he told him he'd give him a pat on his arm. Once Tony heard how in love Rachel was, he couldn't deny his blessing. He gave Clayton a pat on his arm as they left! "I see a future more than ever with Rachel," Clayton said.

Rose Ceremony
Clayton told Jesse that he's falling in love with all the women and he doesn't want to hold his feelings back, but he knows he has to break someone's heart.

Join #TheBachelor on the road to the 🌹ceremony with @Hyundai. Monday at 8/7c on ABC and Stream on Hulu!

That meant Serene was eliminated. Clayton walked her out and apologized. She asked why and he said it was just him choosing to have stronger connections with the others. She said, "Alright," stood up and got in the SUV as Clayton thanked her. She was shocked and confused that he could eliminate her after she told him that she loved him. She seemed to realize there was nothing she could change about it and she gave it her all.

Next Week
We have two nights of "The Bachelor" next week on Monday and Tuesday! Clayton's Fantasy Suite debacle finally happens where he tells three women he loves them and admits that he slept with two of them. Then on Tuesday, it's "The Women Tell All." You know you can expect a lot of drama with Shanae, Elizabeth, Genevieve and others.

Clayton Echard has been named the season 26 "Bachelor" on ABC.