Will 'The Bachelor' Clayton take a rose back after 1 woman might not be there for the right reasons? 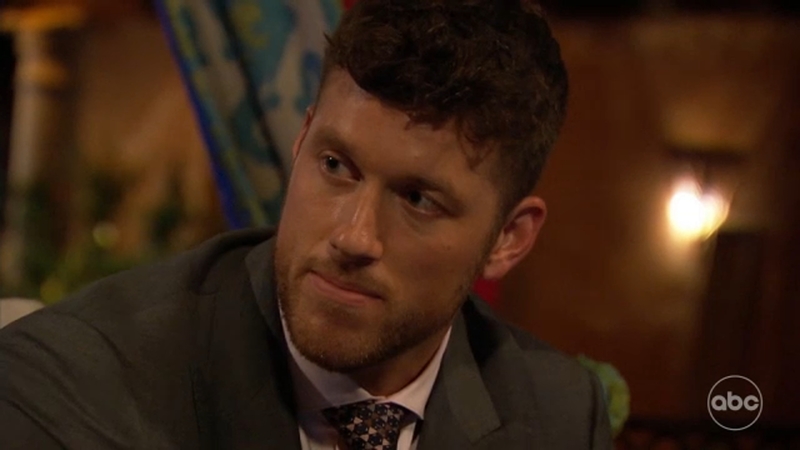 Clayton learns some information and considers taking back a rose

NEW YORK -- Now that the introductions are out of the way, it was time for Clayton to start dating his many remaining women as "The Bachelor." The women moved into "Bachelor Mansion" and it was the first time this was allowed since the pandemic began. They were all elated to be there as they anxiously awaited the first date card of the season.

#TheBachelor Mansion is historic, it's legendary, it is the moment. pic.twitter.com/KVakFbispn

Jesse Palmer walked in and introduced himself to the women and told them that as a former "Bachelor" himself he knows how the show works and also is happily married (not to his pick from the show) so he has some experience there too. He dropped off the first date card and it read, "Teddi, Ency, Melina, Gabby, Kira, Mara, Sierra, Genevieve, Serene, Cassidy, this is what dreams are made of."

First Group Date
The ladies on the first group date met up with Clayton in Beverly Hills. They went inside a giant mansion and to the backyard where there was a big group of children jumping on a bounce house. Hillary Duff then walked up to the group and Cassidy freaked out and told her that hers was the first concert she had ever gone to. Hillary Duff is a mom of three and a major "Bachelor" fan! The women were tasked with setting up a little girl named Maya's birthday party. They had to decorate a cake, do balloons, work as clowns, and build a dollhouse. 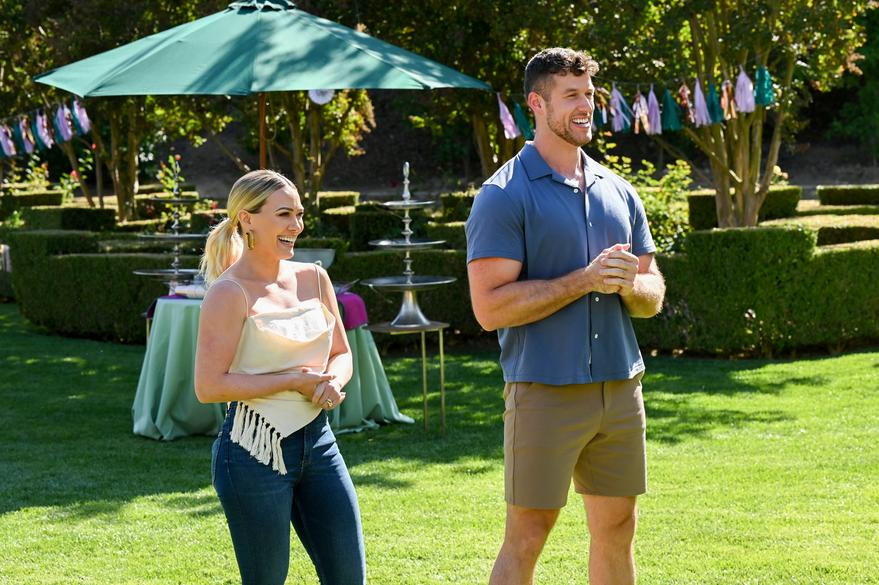 Cassidy decided to pull Clayton aside instead of building the dollhouse with Gabby. She was super aggressive and even started kissing him by the pool. Gabby was of course annoyed and the other women were as well. Cassidy said she was there to date Clayton not build a dollhouse. Once the chores were done and the party was set up, the kids arrived and the women all had to engage with the kids and Clayton took notice of who was doing a good job and who wasn't. The kids were even put off by Cassidy saying that she spends as little time with children as possible. Hopefully, the little ones rat her out. But maybe they didn't need to because Cassidy dropped the cake. She used the opportunity of being covered in frosting to go back to the pool area to rinse off her arms and then make out by the pool with Clayton again.

Later, Clayton and the women had a cocktail party for everyone to get some time to talk with him. He connected with Serene first about how she's great with kids and how being a teacher has changed her life. "I love the effort I've been seeing out of you, but there's one thing missing," Clayton said. Then he kissed her! He said he didn't want to wait anymore to make that connection. Cassidy, meantime, bragged to the group about her kiss and said that the group date was going to be hers. Mara called her out for not helping with the party, and she said she didn't care. There was a big fight between the group and Cassidy and she wasn't amused. Teddi used her time to ask Clayton if he still liked her and he told her she didn't have anything to be concerned about and they used the rest of the time to kiss. He seemed to really enjoy his time with all the ladies. Cassidy told Clayton that she was there for him and she didn't care what the other women were saying about her, and he said he loved the effort she was making to get to know him. They kissed again! In the end, he gave Cassidy the group rose! The faces of the other women showed it all.

One-on-One Date with Susie
The date card read, "Susie, Let's take our love to new heights." Clayton picked her up and she admitted to him while she was grateful to have the one-on-one time together with him, she was very nervous. It seemed like she was even more nervous about the activity. They pulled up to a helicopter! She seemed relieved it wasn't bungee jumping. Clayton and Susie flew around California and even over "Bachelor Mansion." The other women were of course very jealous, especially the pilot, Rachel. Eventually, they docked on a huge yacht! Clayton said that he sees how fun and adventurous she is and he feels a real connection.

This date is hitting all the right notes ❤️🎵 #TheBachelor @Amanda_T_Jordan pic.twitter.com/ggsu8ELoT1

At dinner, Susie told Clayton that her parents are her best friends and she wishes she could call them and tell them about how amazing her time with him was on the date. He told her that his parents have been together 30 years and she said hers have been together 35 years, so they connected over that. Susie said that her father went into organ failure last year and it was extremely scary and he fought to survive so he could hold his first grandson. She said her mom slept in the little chair by his bed the whole time he was in the ICU. Susie said her parents gave her a great example of what love and a relationship should be. Clayton said that Susie feels like she has it all figured out and that's appealing to him as he wants what she wants. Then Clayton took her to hear a private concert by Amanda Jordan singing "I Choose You." It was really sweet. "Your true colors are so beautiful," Clayton told Susie as he offered her the date rose. She said yes and said she sees a lot of potential in Clayton and can see herself falling in love with him.

Second Group Date
Shanae was getting tutored on how to get Clayton's attention and I suppose Cassidy was telling her tips so she could have at least one friend in the house. The group date card arrived and read, "Marlena, Elizabeth, Kate, Sarah, Lyndsey, Rachel, Tessa, Shanae, I don't want anything to stand in the way of our love." Jill wasn't on the date card and she cried. There were a few others left off too. 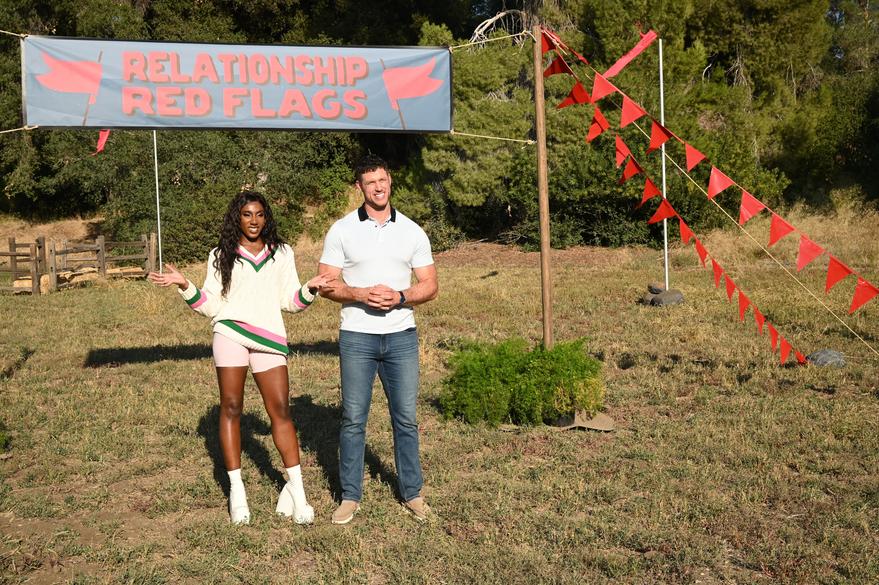 Clayton said he had help with him to figure out who was there for the right reasons. Ziwe is a comedian and she was there to take the ladies to school. They sat at desks and she had them play "Never have I ever." They talked about sending nudies, faking an orgasm, cheating, and have you felt judged by another woman in the house. Shenae said She-nae-nae is now there and did some dancing in front of the group. She's letting herself be free! Then they went outside and did an obstacle course to try to win extra time with Clayton. Sarah seemed to get a little kiss, but not really extra time, it seemed like a big mess.

That evening, they had their chance at a cocktail party and Shenae was hoping to stand out. But, it would take a while because Elizabeth got him first to chat and got her first kiss with Clayton. Shenae threw a fit and walked off to cry while Clayton had a great time with Sarah, Marlena, and Rachel. Finally, Shanae got her turn to talk to Clayton and used her time to talk about "red flags" about other women, in particular Elizabeth. She talked about how two-faced she is and how she might not be there for the right reasons. Using your time talking about other people is never good! But, then Clayton pulled Elizabeth aside to talk to her about what Shenae told him. She told him that Shanae pushed her on the obstacle course but she is there to talk to him that's why she didn't bring up Shanae to him. He was like, ok... and then that was that for the time being.

Elizabeth went back to the group and asked Shanae to talk. The other women that Shenae was a liar for saying she didn't know what was going on when clearly she was the one starting the drama. Shenae told Elizabeth she felt ignored in their conversation by the pool and Elizabeth said she couldn't process what was going on because she has really bad ADHD and sometimes can't follow multiple conversations. So it wasn't intentional. Elizabeth called her out for pushing her and Shanae didn't say that she didn't...so I guess she meant to push her. Elizabeth tried to calm the situation but wasn't sure if she was successful in doing so. Clayton decided to give the group date rose to Sarah! No drama there! Let that be a lesson ladies! Shanae and Elizabeth continued their battle in front of the other women and they seemed to take Elizabeth's side.

Another rose ceremony is upon us, but before that could happen, the ladies got to have a cocktail party with Clayton! Eliza pulled Clayton aside to talk first as she didn't have a date this week. So, she took out a homemade scrapbook that she started to make with Clayton. He told her he loved her idea and said it was a perfect first memory. Shenae and Elizabeth had another fight about ADHD and it got really awkward. Elizabeth walked away, and Shenae continued to rant about her. The other women confronted Shenae again and told her she shouldn't have told all of the women about Elizabeth's ADHD.

Cassidy apparently told the other women at the house earlier this week that there's a guy she regularly hooks up with and he wants to watch the show she's on when she gets back. She told him she was leaving to go film something, but didn't say what the show was. Sierra decided to be the right reasons police in this situation. Clayton was taken aback and decided to give the situation some thought. Sierra then told Cassidy that she did tell Clayton about the friends with benefits. Clayton called Jesse over and asked if anyone ever took a rose back?

Coming Up
In two weeks, we'll find out if Clayton takes the rose back or not and we saw a lot more drama and tears are coming up! The feud between Elizabeth and Shenae continues as well.

Clayton Echard has been named the season 26 "Bachelor" on ABC.