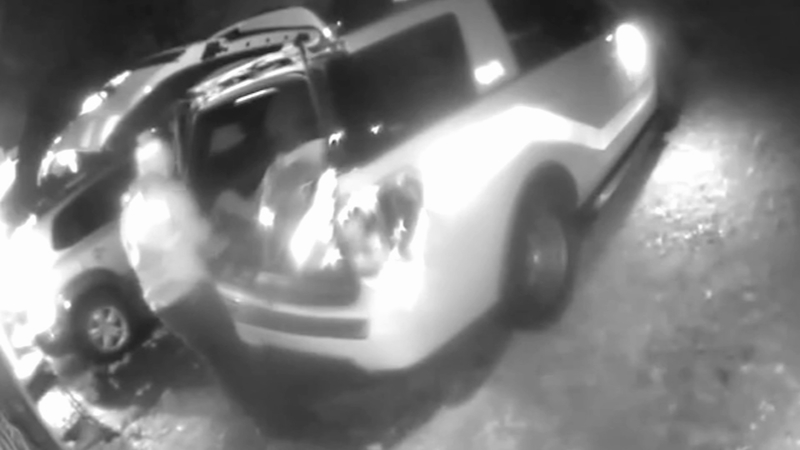 LEVITTOWN, Pennsylvania (WPVI) -- Police in Bucks County are trying to track down the man who was caught on camera stealing fire department equipment out of the fire chief's vehicle.

The chief of Levittown Fire Company #2 says among the items taken was a radio worth about $7,000.

"It takes a lot of guts to come to a marked car and go through a marked car like that," said Fire Chief Chris Shortt.

He says his fire department vehicle was parked in front of his house, not far from the fire station, when a man went through the car and stole personal and fire department items.

Fire officials describe the man as wearing a knitted winter hat with a beard and glasses. He was also wearing a red Nike backpack.

The man can be seen on surveillance video opening the back of the vehicle and rummaging through the items.

The vehicle was unlocked, but Shortt said he was distracted as he left the house, as he and his family were at the hospital for the birth of his second daughter.

"I was sitting in the hospital room feeding my daughter when the camera and the alert went off on my phone," said Shortt.


The fire company's annual Christmas tree sale starts Friday and, with a $7,000 radio to replace, members say the fundraiser is that much more important.

"All that money goes into the general fund. It's how we keep it going and buy all the stuff that we need," said Shortt.

"It's tough. We're here, we're doing the Christmas tree sales and everything to protect the community and then someone comes and does this. It's disheartening," said Lt. Peter Swinehart.

Police say they are investigating and have disabled the stolen radio.